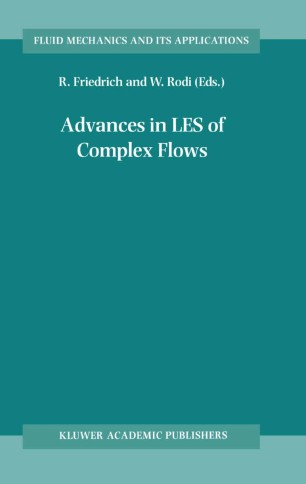 Advances in LES of Complex Flows

Proceedings of the Euromech Colloquium 412, held in Munich, Germany 4–6 October 2000

Part of the Fluid Mechanics and Its Applications book series (FMIA, volume 65)

The articles focus on new developments in the field of large-eddy simulation of complex flows and are related to the topics: modelling and analysis of subgrid scales, numerical issues in LES cartesian grids for complex geometries, curvilinear and non-structured grids for complex geometries. DES and RANS-LES coupling, aircraft wake vortices, combustion and magnetohydrodynamics.

Progress has been made not only in understanding and modelling the dynamics of unresolved scales, but also in designing means that prevent the contamination of LES predictions by discretization errors. Progress is reported as well on the use of cartesian and curvilinear coordinates to compute flow in and around complex geometries and in the field of LES with unstructured grids. A chapter is dedicated to the detached-eddy simulation technique and its recent achievements and to the promising technique of coupling RANS and LES solutions in order to push the resolution-based Reynolds number limit of wall-resolving LES to higher values.

Complexity due to physical mechanisms links the last two chapters. It is shown that LES constitutes the tool to analyse the physics of aircraft wake vortices during landing and takeoff. Its thorough understanding is a prerequisite for reliable predictions of the distance between consecutive landing airplanes. Subgrid combustion modelling for LES of single and two-phase reacting flows is demonstrated to have the potential to deal with finite-rate kinetics in high Reynolds number flows of full-scale gas turbine engines. Fluctuating magnetic fields are more reliably predicted by LES when tensor-diffusivity rather than gradient-diffusion models are used. An encouraging result in the context of turbulence control by magnetic fields.