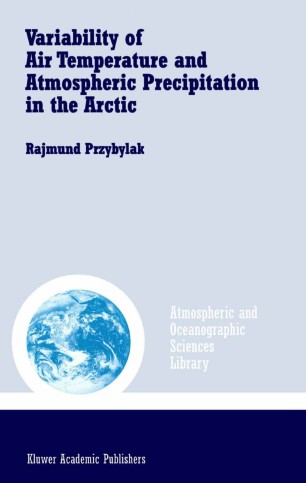 Variability of Air Temperature and Atmospheric Precipitation in the Arctic

It has been known at least since the end of the century that the polar areas play a very important role in the formation of the Earth’s climates. It is also known today that they are the most sensitive regions to climatic change, and are thus perfect case studies for the detection of such changes. The most serious obstacle to the study of climatic and other geographical elements of the polar areas (including the Arctic) has always been the severe climatic conditions which prevail in these regions. Because of these extreme con- tions, research into particular elements of the climatic system (including the atmosphere) began here much later than it did in lower latitudes. For instance, the whole area of the Arctic was not sufficiently covered with a network of meteorological stations until the late 1940s (and even then there were large areas of the central Arctic and the Greenland interior for which no data were available). This is probably why it was not until the start of the 1990s that a body of work began to appear which analysed in any depth climatic variability for the Arctic as a whole. While a considerable number of papers had been p- lished before this period, most of them were local studies presenting highly localised information, providing air temperature measurements but often little else.