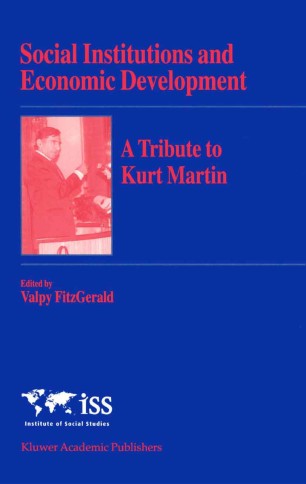 A Tribute to Kurt Martin

Jan Pronk The role of institutions in economic development has been debated at length. It is a major chapter in the history of economic thought. It was also a key - sue in comparisons of the effectiveness of Eastern and Western economic systems. Understanding the variety of social and cultural institutions has - ways been crucial in analysing development processes in Africa, Asia, the Middle East and Latin America. Less attention has been given to institutions in studies of the economic performance of Western countries. This may be because economic policies in the West were mostly oriented to the short and medium terms rather than to the long-term perspective. In the short run ins- tutions are given, in the long run they lend themselves for change. From the outset, economic institutions (e.g. markets, enterprises) and their underlying values (e.g. efficiency, economicfreedom) received much - tention. Similar attention was given to political institutions (the state, government, the law) and values (democracy, accountability, human rights). Thought also turned to social institutions (entrepreneurship, the middle class, the family household, land-tenure systems) and social values (tradition, gender and age relations, justice). Studies soon followed of cultural insti- tions (religion, ethnicity) and values (material consumerism or the bond between man and nature). Without the insight gained by studying insti- tions, economics would have become a dull discipline.