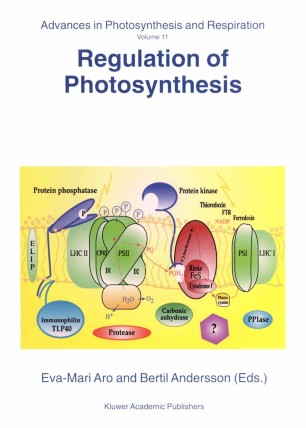 Part of the Advances in Photosynthesis and Respiration book series (AIPH, volume 11)

The progress in photosynthesis research has been transduction and expression of photosynthetic genes quite dramatic during the last two decades. The which occur both in the nuclear/cytosol compartment Nobel prizes awarded to Peter Mitchel (1978), to and in the chloroplast. Several chapters are devoted Johannes Deisenhofer, Hartmut Michel and Robert to the transcription machinery and the two plastid Huber (1988), to Rudolf Marcus (1992) and to Paul RNA-polymerase complexes, to the regulation of Boyer and John Walker (1997) have recognized— photosynthesis genes by redox signaling both in directly or indirectly—the structural or mechanistic chloroplasts and in the prokaryotic systems, as well discoveries related to the photosynthetic energy as to the sugar sensing mechanisms. Chapters also conversion. Actually, photosynthesis may be the first cover important regulatory aspects imposed by po- biological process described, not only in molecular transcriptional modifications and degradation of terms, but even in atomic terms. mRNA molecules, and the translational regulation Much of the excitement around photosynthesis is mechanisms operating in chloroplasts. based upon the connection between light and life. Part III—Biogenesis, turnover and senescence— is closely connected to the question of regulation. Light is an elusive ‘substrate’ that cannot be handled The chapters included emphasize how the c- in the same way as conventional chemical substrates plicated membrane structures, composed of both in biological metabolic reactions.

'I was favorably impressed with the Regulation of Photosynthesis. The chapters are well-written and should be understandable to a broad audience; it will be an invaluable resource in graduate courses.'
Plant Science,162 (2002)
Buy options