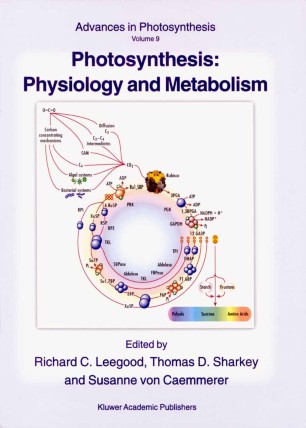 Part of the Advances in Photosynthesis and Respiration book series (AIPH, volume 9)

Photosynthesis: Physiology and Metabolism is the we have concentrated on the acquisition and ninth volume in theseries Advances in Photosynthesis metabolism of carbon. However, a full understanding (Series Editor, Govindjee). Several volumes in this of reactions involved in the conversion of to series have dealt with molecular and biophysical sugars requires an integrated view of metabolism. aspects of photosynthesis in the bacteria, algae and We have, therefore, commissioned international cyanobacteria, focussing largely on what have been authorities to write chapters on, for example, traditionally, though inaccurately, termed the ‘light interactionsbetween carbon and nitrogen metabolism, reactions’(Volume 1, The Molecular Biology of on respiration in photosynthetic tissues and on the Cyanobacteria;Volume2,AnoxygenicPhotosynthetic control of gene expression by metabolism. Photo- Bacteria, Volume 3, Biophysical Techniques in synthetic carbon assimilation is also one of the most Photosynthesis and Volume 7, The Molecular Biology rapid metabolic processes that occurs in plant cells, of the Chloroplasts and Mitochondria in Chlamy- and therefore has to be considered in relation to domonas). Volume 4 dealt with Oxygenic Photo- transport, whether it be the initial uptake of carbon, synthesis: The Light Reactions, and volume 5 with intracellular transport between organelles, inter- Photosynthesis and the Environment, whereas the cellular transport, as occurs in plants, or transport structure and function of lipids in photosynthesis of photosynthates through and out of the leaf. All was covered in Volume 6 of this series: Lipids in these aspects of transport are also covered in the Photosynthesis: Structure, Function and Genetics, book.