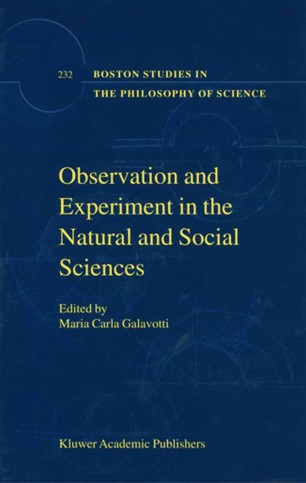 Observation and Experiment in the Natural and Social Sciences

Part of the Boston Studies in the Philosophy of Science book series (BSPS, volume 237)

According to a long tradition in philosophy of science, a clear cut distinction can be traced between a context of discovery and a context of justification. This tradition dates back to the birth of the discipline in connection with the Circles of Vienna and Berlin, in the twenties and thirties of last century. Convicted that only the context of justification is pertinent to philosophy of science, logical empiricists identified its goal with the “rational reconstruction” of scientific knowledge, taken as the clarification of the logical structure of science, through an analysis of its language and methods. Stressing justification as the proper field of application of philosophy of science, logical empiricists intended to leave discovery out of its remit. The context of discovery was then discarded from philosophy of science and left to sociology, psychology and history. The distinction between context of discovery and context of justification goes hand in hand with the tenet that the theoretical side of science can – and should – be kept separate from its observational and experimental components. Further, the final, abstract formulation of theories should be analysed apart from the process behind it, resulting from a tangle of context-dependent factors. This conviction is reflected by the distinction between theoretical and observational sentences underpinning the Hempelian view of theories as nets, whose knots represent theoretical terms, floating on the plane of observation, to which it is anchored by rules of interpretation.