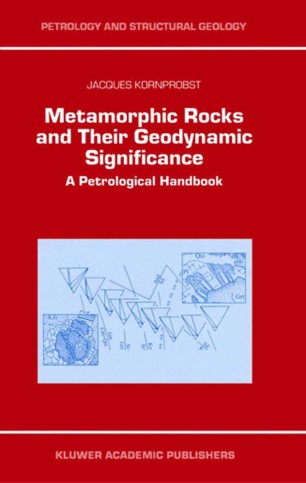 Metamorphic Rocks and Their Geodynamic Significance

From metamorphism to metamorphosis, there is only a shade of a nuance. Because me- morphic rocks are not only what they are, but also what they were, and they tell of what happened in between. What must be discovered: how to recognize in the butterfly, the caterpillar that was, or in the caterpillar the butterfly that will be? And how to describe the metamorphosis, excuse me, metamorphism which leads from one to the other? It is to this engaging history, this marvelous tale, written progressively over time, which Jacques Kornprobst leads us. If the sedimentary and magmatic rocks have been the object of reflection for a long time, for which a contradiction was established in the century in the confrontation between the Neptunism of Werner for whom everything came from the sea, and the P- tonism of Hutton who derived all rocks from the interior of the earth, the “crystalline schists” as they were called, and as we call them today for simplicity, appear most ambi- ous: they had the crystals of rocks of endogenous origin and appeared to have the strati- cation of exogenous rocks with which one confused the schistosity. These crystalline schists are in some ways the bats of the rock kingdom.