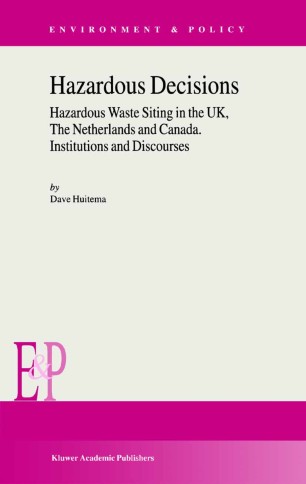 Hazardous Waste Siting in the UK, The Netherlands and Canada Institutions and Discourses

where Jeremy Richardson, Albert Weale and Hugh Ward were excellent hosts at the Department of Government and Thomas Christiansen a very good roommate. Having included the UK as a country where decision processes were far less participatory (and thus ‘worse’ in my own view) than those in the Netherlands, I started doing my first interviews there, which were mainly intended to identify suitable case studies for research. But then I read a highly critical review of a book that had a similar topic as my study. The critique was that cases of hazardous waste siting cannot adequately be studied without understanding their national context. This made me decide to devote some attention to the legal context of hazardous waste siting in the three countries of interest (which is of course only a part of the national context) and its development through the years. The study of the UK system of environmental regulation and land use planning was not a simple issue, and I was warned various times (for instance by Andrew Blowers at the Open University) that the legislation was highly complex and easily misinterpreted. I felt personally touched by such warnings and decided that I should perhaps approach the UK system a bit less as an evil empire and maybe be a bit more ‘objective’ in my appraisals.