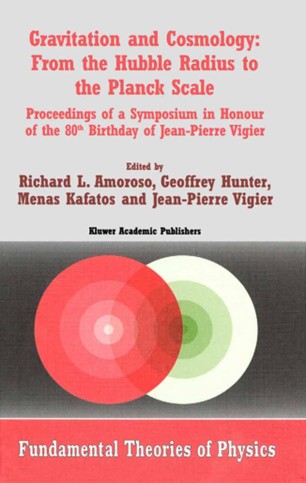 Gravitation and Cosmology: From the Hubble Radius to the Planck Scale

Jean-Pierre Vigier continually labeled one of les heretiques de la science, l’eternel resistant et le patriarche is yet a pillar of modern physics and mathematics, with one leg firmly planted in theory and the other in empiricism spanning a career of nearly 60 years with a publication vitae quickly approaching 400! He wrote of his mentor Louis de Broglie “Great physicists fight great battles”, which perhaps applies even more so to 1 Jean-Pierre Vigier himself . If fortune allows a visit to Paris, reported to be the city of love, and certainly one of the most beautiful and interesting cities in the world; one has been treated to a visual and cultural feast. For example a leisurely stroll from the Musee du Louvre along the Champs-Elysees to the Arc de Triomphe would instill even the least creative soul with the entelechies of a poets muse. It is perhaps open to theoretical interpretation, but if causal conditions have allowed one to be a physicist, visiting Paris, one may have taken opportunity to visit the portion of the old Latin quarter in place Jussieu where Pierre et Marie Curie Universite, reported to be ‘the best university in France’, is stationed.