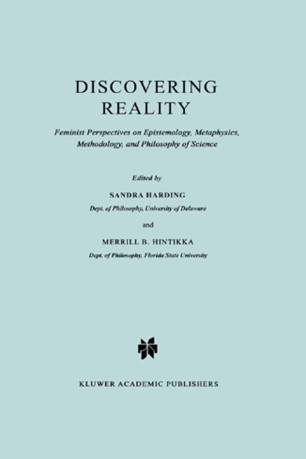 Feminist Perspectives on Epistemology, Metaphysics, Methodology, and Philosophy of Science

Are Western epistemology, metaphysics, methodology and the philosophy of science grounded only in men's distinctive understandings of themselves, others, and nature? Does this less than human understanding distort our models of reason and of scientific inquiry? In different ways, the papers in this collection explore the evidence for these increasingly reasonable and intriguing questions. They identify how it is distinctively masculine perspectives on masculine experience which have shaped the most fundamental and formal aspects of systematic thought in philosophy and the natural and social sciences - precisely the aspects of thought believed most gender-neutral. They show how these understandings ground Aristotle's biology and metaphysics; the very definition of the problems of philosophy in Plato, Descartes, Hobbes and Rousseau; the `adversary method' which is the paradigm of philosophic and scientific reasoning; principles of individuation in philosophical ontology and the philosophy of language; individualistic assumptions in psychology; functionalism in sociological and biological theory; evolutionary theory; the methodology of political science; Marxist political economy; and conceptions of `objective inquiry' in the social and natural sciences. These essays also begin to identify for us the distictive aspects of women's experience which can provide the resources needed for the creation of a truly human understanding.
Audience: The book will be of interest to those involved in epistemology, and philosophy of the natural and social sciences, as well as feminist scholars in philosophy. The work will also be of value for theorists, methodologists, and feminist scholars in the natural and social sciences.