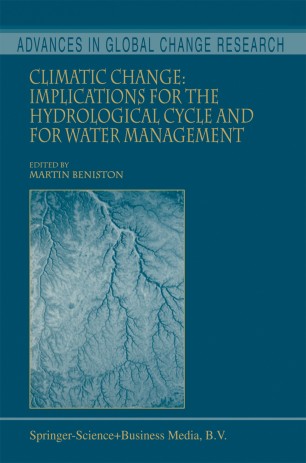 Climatic Change: Implications for the Hydrological Cycle and for Water Management

year simulations in order to separate noise in the system from the climate change signal. Several contributing papers focused on case studies using Regional Climate Models (RCMs) linked to hydrological models, applied to the analysis of runoff under conditions of convective activity and extreme precipitation, in regions of complex topography, or stakeholder-driven investigations such as water runoff simulations in Quebec undertaken for a major utility. Thorough analyses of GCM results for the Century were reported at the Workshop, in order to illustrate the improvements in model results which have taken place in recent years, and the increasing confidence with which the models can be used for projecting climatic change in coming decades. However, there is still much room for improvement; there is also a need to address more fully the manner in which climate and impacts models (e. g. , hydrological models) can be linked, in terms of consistency and the overlap between different scales, the underlying physical assumptions, and the parameterizations used. Session 2 was devoted to the two extremes of water resources, namely floods and droughts, the focus here being to identify the climate change component in river floods. These have significant economic implications, as was shown by several scientists from Western and Central Europe. Many long time series have been studied worldwide with the aim of detection of nonstationarities, yet there is no conclusive evidence of climate-related changes in flow records, in general.

"This book is recommended as an excellent review, well worth reading."
(Holocene, 13/1 (2003)
Buy options