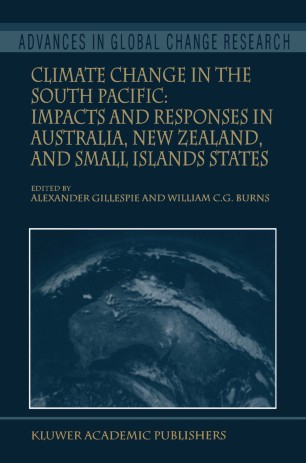 ALEXANDER GILLESPIE & WILLIAM C.G. BURNS The idea for this book grew out of the Ecopolitics conference in Canberra, Australia in 1996. The conference captured the ferment of the climate change debate in the South Pacific, as well as some its potential implications for the region’s inhabitants and e- systems. At that conference, one of the editors (Gillespie) delivered a paper on climate change issues in the region, as did Ros Taplin and Mark Diesendorf, who are also c- tributors to this volume. This book focuses on climate change issues in Australia, New Zealand, and the small island nations in the Pacific as the world struggles to cope with possible the impacts of environmental change and to formulate effective responses. While Australia and New Zealand’s per capita emissions of greenhouse gases are among the highest in the world, their aggregate contributions are small. However, both nations may exert a disprop- tionate influence in the global greenhouse debate because their obstinate positions at recent conferences of the parties to the United Nations Framework Convention on C- mate Change (FCCC) may provide justification for other developed nations, as well as developing countries, to refuse to make meaningful reductions in their greenhouse gas emissions.