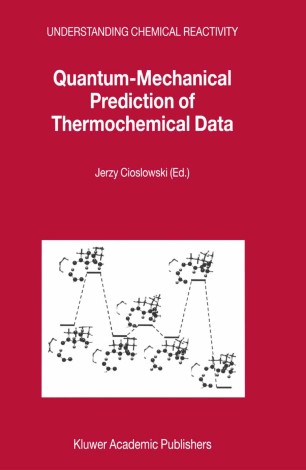 For the first time in the history of chemical sciences, theoretical predictions have achieved the level of reliability that allows them to - val experimental measurements in accuracy on a routine basis. Only a decade ago, such a statement would be valid only with severe qualifi- tions as high-level quantum-chemical calculations were feasible only for molecules composed of a few atoms. Improvements in both hardware performance and the level of sophistication of electronic structure me- ods have contributed equally to this impressive progress that has taken place only recently. The contemporary chemist interested in predicting thermochemical properties such as the standard enthalpy of formation has at his disposal a wide selection of theoretical approaches, differing in the range of app- cability, computational cost, and the expected accuracy. Ranging from high-level treatments of electron correlation used in conjunction with extrapolative schemes to semiempirical methods, these approaches have well-known advantages and shortcomings that determine their usefulness in studies of particular types of chemical species. The growing number of published computational schemes and their variants, testing sets, and performance statistics often makes it difficult for a scientist not well versed in the language of quantum theory to identify the method most adequate for his research needs.