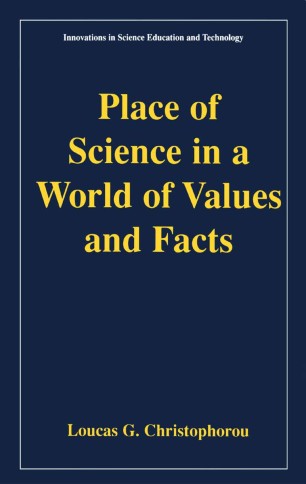 Place of Science in a World of Values and Facts

Part of the Innovations in Science Education and Technology book series (ISET, volume 10)

This is an engrossing book. It is also an unusual book: it is written by a scientist who is quite willing to talk about the softer side of life, about things such as love and respect and responsibility, and to try and position them in the context of his science. He is also willing to talk about religion, the manner in which it relates to science and science to it, and to attempt reconciliation of both. He sets himself a tough task, to tread the narrow path between the maudlin and the severely sober. In this, he is eminently successful. He is successful not because he aims at any grand synthesis, but because he has chosen the more modest path of simply laying out the cards on the table. This work is also unusual for another reason. The majority of books that attempt to explain science to a lay public, that try to describe its workings, its raison d'être, its hidden contents, its societal impact, its implications for our future, etc. , are written by theorists. This is hardly surprising. The theoretician, after all, is expected to think deeply, to be the great unifier, to be concernedwith meaning. Very few books about science are written by scientists, ones who spend their time in a working experimental laboratory. This is such a book. And because it is, it is also a very different book.