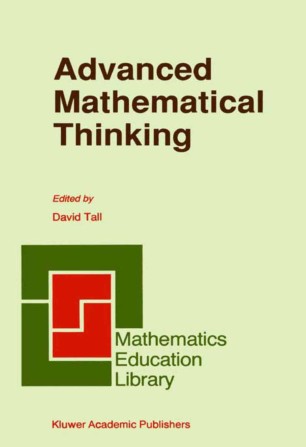 Advanced Mathematical Thinking has played a central role in the development of human civilization for over two millennia. Yet in all that time the serious study of the nature of advanced mathematical thinking – what it is, how it functions in the minds of expert mathematicians, how it can be encouraged and improved in the developing minds of students – has been limited to the reflections of a few significant individuals scattered throughout the history of mathematics. In the twentieth century the theory of mathematical education during the compulsory years of schooling to age 16 has developed its own body of empirical research, theory and practice. But the extensions of such theories to more advanced levels have only occurred in the last few years. In 1976 The International Group for the Psychology of Mathematics (known as PME) was formed and has met annually at different venues round the world to share research ideas. In 1985 a Working Group of PME was formed to focus on Advanced Mathematical Thinking with a major aim of producing this volume. The text begins with an introductory chapter on the psychology of advanced mathema- cal thinking, with the remaining chapters grouped under three headings: • the nature of advanced mathematical thinking, • cognitive theory, and • reviews of the progress of cognitive research into different areas of advanced mathematics.