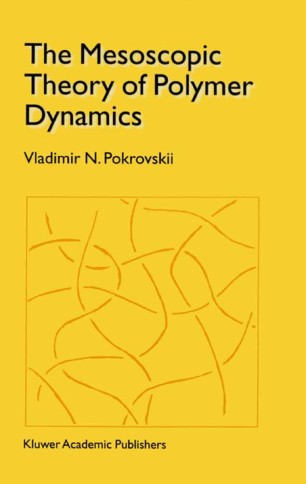 The Mesoscopic Theory of Polymer Dynamics

Our brutal century of atom bombs and spaceships can also be called the century ofpolymers. In any case, the broad spreading ofsynthetic polymer materials is one of thesigns of our time. A look at the various aspects of our life is enough to convince us that polymeric materials (textiles, pl- tics, rubbers) are as widely spread and important in our life as are other materials (metals and non-metals) derived from small molecules. Polymers have entered the life of the twentieth century as irreplaceable construction materials. Polymers differ from other substances by the size of their molecules which, appropriately enough, are referred to as macromolecules, since they consist of thousands or tens of thousands of atoms (molecular weight up to -4 6 10 ormore) andhave a macroscopic rectilinear length (upto 10 cm). The atoms ofa macromolecule are firmly held together by valence bonds, fo- ing a single entity. In polymeric substances, the weaker van der Waals forces have an effect on the components of the macromolecules which form the system. The structure of polymeric systems is more complicated than that oflow-molecular solids or liquids, but there are some common features: the atoms within a given macromolecule are ordered, but the centres ofmass of the individual macromolecules and parts of them are distributed randomly. Remarkably, the mechanical response of polymeric systems combines the elasticity of a solid with the fluidity of a liquid.