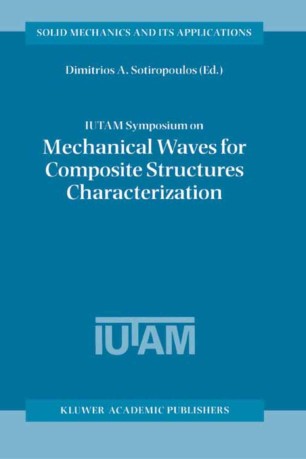 Part of the Solid Mechanics and its Applications book series (SMIA, volume 92)

This book is a collection of selected reviewed papers that were presented at the International Union of Theoretical and Applied Mechanics Symposium "Mechanical waves for composite structures characterization". The Symposium took place June 14-17, 2000 in Chania, Crete, Greece. As is customary, IUTAM Symposia Proceedings are published in the series "Solid Mechanics and Its Applications" by Kluwer Academic Publishers. I am indebted to Professor G. M. L. Gladwell who is the series editor. I would also like to take this opportunity to express my sincere gratitude to Professor M. A. Hayes the Secretary General of the International Union of Theoretical and Applied Mechanics and a member ofthe Symposium's Scientific Committee. His constant encouragement and support made the Symposium not only possible but also successful. To the success also contributed all the members of the Symposium's Scientific Committee which I had the honor to chair. I express my appreciation to each one of them who are: Professor J. D. Achenbach (Northwestern University, Evanston, Illinois, USA), Professor M. A. Hayes (University College, Dublin, Ireland), Professor K. J. Langenberg (University of Kassel, Germany), Professor A. K. Mal (University of California, Los Angeles, USA), Professor X. Markenscoff (University of California, San Diego, USA), Professor S. Nair (Illinois Institute of Technology, Chicago, USA), Professor R. W. Ogden (University of Glasgow, UK), Professor G.