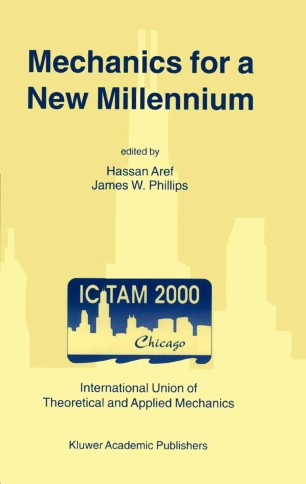 Mechanics for a New Mellennium

The 20th International Congress of Theoretical and Applied Mech- ics, ICTAM 2000, took place August 27 – September 2, 2000, in the c- ference facilities of the Chicago Marriott Downtown on Michigan Avenue in Chicago, Illinois, USA. The Congress was invited by the US National Academy of Sciences on the recommendation of its National Comm- tee on Theoretical and Applied Mechanics. A consortium of university departments and programs acted as the local hosts. The undersigned served, respectively, as President and Secretary-General of the Congress. In this Proceedings volume we have attempted to capture the exci- ment of that memorable week. We have laid out the book so that it, roughly, tracks the events during the week of the Congress in much the order in which they occurred. We have given addresses and reports in context, although sometimes with embellishments to provide more data than could reasonably be presented orally. We have tried to reproduce essentials of the Opening and Closing ceremonies for the benefit of those who could not attend one or the other. We have tried to assemble an attractive volume that will have lasting value by adding an extensive name index and a briefer keyword index, and by exercising considerable care in the consistency of the layout of the full manuscripts. The international congresses of mechanics are major events of the field—we compare them to the Olympic Games in sports.