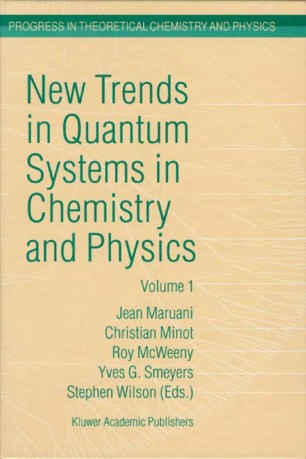 New Trends in Quantum Systems in Chemistry and Physics

Part of the Progress in Theoretical Chemistry and Physics book series (PTCP, volume 6)

These two volumes collect thirty-eight selected papers from the scientific contributions presented at the Fourth European Workshop on Quantum Systems in Chemistry and Physics (QSCP-IV), held in Marly-le-Roi (France) in April 22-27, 1999, A total ofone hundred and fifteen scientists attended the workshop, 99 from Europe and 16 from the rest ofthe world. They discussed the state of the art, new trends, and future evolution of the methods and applications. The workshop was held in the old town of Marly-le-Roi, which lies to the West of Paris between the historic centres of Saint-Germain-en-Laye and Versailles. Participants were housed at the National Youth Institute, where over sixty lectures were given by l- ding members ofthe scientific community; in addition, over sixty posters were presented in two very animated sessions. We are grateful to the oral speakers and to the poster p- senters for making the workshop such an stimulating experience. The social programme was also memorable - and notjust for the closing banquet, which was held at the French Senate House. We are sure that participants will long remember their visit to the 'Musée des Antiquités Nationales': created by Napoleon III at the birthplace ofLouis XIV, this museum boasts one ofthe world finest collections ofarcheological artifacts. The Marly-le-Roi workshop followed the format established at the three previous meetings, organized by Prof.