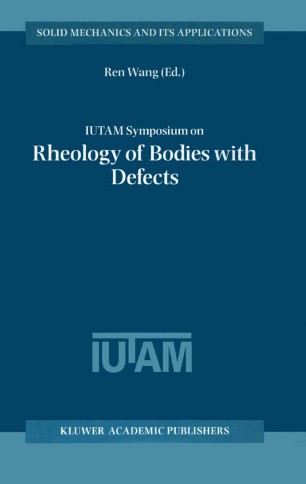 IUTAM Symposium on Rheology of Bodies with Defects

Proceedings of the IUTAM Symposium held in Beijing, China, 2–5 September 1997

Part of the Solid Mechanics and its Applications book series (SMIA, volume 64)

The IUTAM Symposium on Rheology of Bodies with Defects was held in Beijing in September, 1997. It was aimed at the development of Rheology in Solid Mechanics. Rheology is classified in Applied Mechanics Review under fluid mechanics, however, in its broadest content as was envisaged in its earlier days, it covers the whole spectrum of material behavior from elasticity, plasticity, and fluid mechanics to gas dynamics. It was thought of as a branch of continuum mechanics, but emphasized the physical aspects of different materials, and frequently proceeded from basic physical principles. As the temperature rises, the distinction between solid and fluid, and the distinction between their micro-mechanical movements, become blurred. The physical description of such materials and their movements must be based on the thermodynamic principles of state variable theory; the classical division between solid and fluid mechanics disappears. Under the classification adopted by Applied Mechanics Reviews, the subjects dealt with in this symposium come closer to viscoelasticity and viscoplasticity, especially close to the subdivision of creep dealing with creep rupture. The symposium focused at building a bridge between macroscopic and microscopic research on damage and fracture behavior of defective bodies made of metal, polymer, composite and other viscoelastic materials. Two different approaches are presented at the symposium. The first is a continuum damage theory for time-dependent evolution of defects at the macro/meso/microscopic levels.