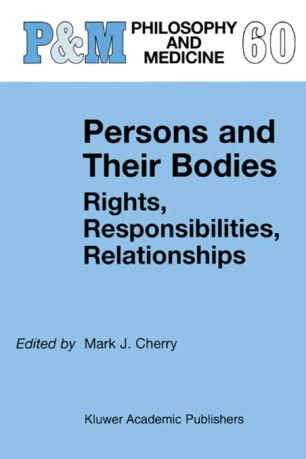 Part of the Philosophy and Medicine book series (PHME, volume 60)

Debate regarding organ sales is largely innocent of the history of thought on the matter. This volume seeks to remedy this shortcoming. Positions for or against a market in human organs are nested within moral intuitions, ontological or political theoretical premises, or understandings of special moral concerns, such as permissible uses of the body, which have a long history of analysis. The essays compass the views of Plato, Aristotle, Aquinas, Locke, Kant, Hegel, Mill and Christianity, as well as particular methodological approaches, such as the phenomenology of the body, natural law theory, legal theory and libertarian critique of legal theory. These discussions cluster a number of conceptually independent philosophical concerns: (1) What is the appropriate understanding of the relationship between persons and their bodies? (2) What does it mean to `own' an organ? (3) Do governments have moral authority to regulate how persons use their own body parts? (4) What are the costs and benefits of a market in human organs? Such questions are related by an urgent public health challenge: the considerable disparity between the number of patients who could significantly benefit from organ transplantation and the number of human organs available for transplantation. This volume explores the theoretical, normative, and historical foundations for alternative policies for procurement and transplantation of human organs.