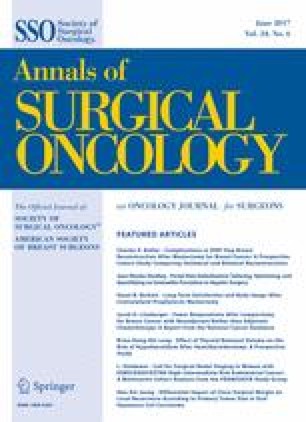 Minimally invasive surgery (MIS) is proved to be feasible and safe oncologically. In the past decade, a new philosophy of MIS, reducing abdominal trauma and improving the cosmetic results, has been popularized. 1–3 The authors report a three trocars laparoscopic total gastrectomy + D2 lymphadenectomy for lesser curvature gastric adenocarcinoma.

A 52-year-old woman presenting a nondifferentiated gastric adenocarcinoma at the incisura angularis was admitted at consultation. Preoperative workup showed a T3N+M0 tumor. After neoadjuvant chemotherapy, laparoscopy was scheduled. Three trocars (5, 12, 5 mm) were placed in the abdomen. The operative field’s exposure was improved by temporary percutaneous sutures. En bloc total gastrectomy and omentectomy was performed with a D2 lymphadenectomy, including the nodes of the stations 1, 2, 3, 4, 5, 6, 7, 8a, 8p, 9, 10, 11p, 11d, and 12a. Completely manual end-to-side esophago-jejunal anastomosis (Fig. 1a, b) and linear mechanical side-to-side jejuno-jejunal anastomosis were realized with the closure of both mesenteric and mesocolic defects. The specimen was retrieved through a suprapubic access.

Presented as video at the Annual Clinical Congress of the American College of Surgeons, Chicago, IL, October 4-8, 2015.

The other authors have no conflicts of interest or financial ties to disclosure regarding this video.