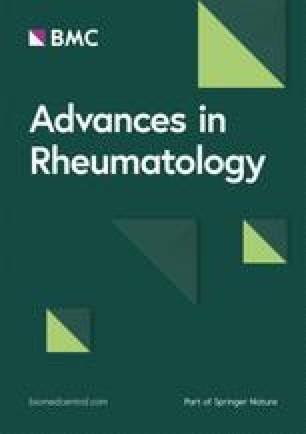 Evaluation of the association between KIR polymorphisms and systemic sclerosis: a meta-analysis

The results of investigations on the association between killer cell immunoglobulin-like receptor (KIR) gene polymorphisms and the risk of systemic sclerosis (SSc) are inconsistent. To comprehensively evaluate the influence of KIR polymorphisms on the risk of SSc, this meta-analysis was performed.

Five articles, comprising 571 patients and 796 healthy participants, evaluating the KIR gene family polymorphisms were included in the final meta-analysis according to the inclusion and exclusion criteria, and 16 KIR genes were assessed. None of the KIR genes were significantly associated with the risk of SSc.

The current meta-analysis provides evidence that KIR genes might not be potential risk factors for SSc risk.

Although the pathogenesis of SSc remains obscure, it is generally accepted that the complicated interplay between environmental agents and genetic predisposing factors can lead to the initiate autoimmune responses. Dysregulation of the innate immune system has been detected in autoimmune diseases such as SSc [2]. Natural killer (NK) cells are essential components of innate immune system that contribute to the early host defense. NK cells recognize cancerous and infected host cells through killer cell immunoglobulin-like receptor (KIR)- major histocompatibility complex (MHC) interactions and lyse them without antigen sensitization. In addition, NK cells produce various cytokines, including interferon (IFN)-γ, tumor necrosis factor (TNF)-α, granulocyte-macrophage colony stimulating factor, interleukin (IL)-5, IL-10, IL-13, and transforming growth factor (TGF)-β [3, 4]. TGF-β is defined as a profibrotic cytokine that provokes fibroblasts differentiation into myofibroblasts. Myofibroblasts are believed to be of major effector cells involved in SSc fibrosis [5, 6].

KIR receptors are members of the immunoglobulin superfamily, which are expressed on the surface of NK cells and subsets of T cells [18], and are encoded by genes located on human chromosome 19q13.4. Up to date, 17 highly homologous KIR genes have been identified in human, which are divided into three different kinds; activating (2DS1 - 2DS5, and 3DS1), inhibitory (2DL1 - 2DL4, 2DL5A, 2DL5B, 3DL1, 3DL2, and 3DL3), and pseudogenes (2DP1 and 3DP1) [19]. Previous studies have shown that KIR gene polymorphisms are involved in etiopathogenesis of autoimmune diseases, such as rheumatoid arthritis (RA) [20], systemic lupus erythematosus (SLE) [21, 22], multiple sclerosis (MS) [23], and etc.

The association between KIR gene polymorphisms and the risk of SSc have been evaluated by several case-control studies. However, low statistical power, small sample size, clinical heterogeneity, and the extent of linkage disequilibrium between genotypes are elements which could be the cause of the inconsistent results of these studies. Meta-analysis has been proposed as an efficient method, which can integrate small studies and overcome the mentioned limitations [24]. Therefore, in this study, we perform a meta-analysis to clarify the association between KIR polymorphisms and susceptibility to the SSc.

The PRISMA guidelines were exerted to prepare this article [25].

We searched databases including PubMed/MEDLINE and Scopus to find all eligible case-control studies of KIR gene family polymorphisms and SSc risk up to July 2019. Moreover, we searched for non-digitally archived literature and interviewed relevant experts and research centers to identify any gray literature. The following keywords were used to search these databases: (“KIR” or “Killer cell immunoglobulin-like receptors) AND (“systemic sclerosis” OR “scleroderma”) with “OR” and “AND” and “NOT” Boolean operators in the Title/Abstract/Keywords fields. We reviewed all references to include any related studies on genotyping and polymorphisms in the KIR gene family. Only literature published in English and human population studies were included in the current meta-analysis.

The following criteria were considered for study inclusion in this meta-analysis: (1) case-control studies that evaluated the association of KIR gene family polymorphisms and SSc risk; and (2) studies with available KIR gene polymorphism frequencies to allow for calculation of odds ratios (ORs) with 95% confidence interval (CIs). The exclusion criteria were (1) duplication or overlapping subjects in any studies; (2) publications that were letters, reviews, comments, or abstract only; and (3) studies with inadequate data with respect to KIR gene polymorphism frequency.

All data were extracted according to the described criteria. The following information was included: first author’s last name, year of publication, and frequency of KIR genes in SSc patients and healthy controls. The Newcastle-Ottawa Scale was used for assessing methodological quality. Studies were graded as low, moderate, or high quality according to scores of 0–3, 4–6, and 7–9, respectively. Two independent investigators without knowledge of existing scores examined the selected studies based on the criteria described above to resolve any discrepancies.

We used pooled ORs and corresponding 95% CIs for KIR genes to evaluate KIR gene family polymorphisms and SSc risk. In order to calculate the phenotypic frequency (pf %) in each group, the percentage of positive numbers between all samples was used. For calculating genotypic frequency (gf) among all participants, the formula gf = 1– (1 – pf) ½ was exerted. Cochran’s Q test was used to assess heterogeneity, and the I2 method was employed for calculating the variation in the pooled estimations. For the latter test, significance was considered at P < 0.1 [26]. The meta-analysis was performed with a random-effects model when heterogeneity between the individual studies was statistically significant. Otherwise, a fixed-effects model was used. Meanwhile, a sensitivity analysis was done by successively removing a particular study or group of studies (if any) that had the highest impact on the heterogeneity test. A funnel plot was established for checking the existence of publication bias. The funnel plot asymmetry was measured by Egger’s linear regression test and Begg’s test (P < 0.05 was considered to indicate statistically significant publication bias) [27]. All statistical analyses were conducted by using data analysis and statistical software (STATA) (version 11.0; Stata Corporation, College Station, TX) and MedCalc.

Characteristics of the eligible studies

Figure 1 displays the inclusion/exclusion process of the potential studies with respect to the meta-analysis of KIR gene association with the risk of SSc. The initial search resulted in 19 related studies. Based on exclusion/inclusion criteria, 5 articles with 571 patients and 796 healthy participants were included in the final meta-analysis [15, 28, 29, 30, 31]. All included papers were case-control studies. One paper involved the Brazilian population, and the other four studies were conducted in Europe/Germany, Turkey, Mexico, and Iran. The range of publication years was 2004 to 2019 (Table 1). Based on the Newcastle-Ottawa Scale criteria, all included studies had a total score ranging from 7 to 9. The key characteristics and the KIR gene frequencies of the included studies in this meta-analysis are presented in Table 1.
Table 1

Specifications of the included studies in this meta-analysis

Table 2 presents a summary of the frequency of 16 KIR genes, pooled ORs, and heterogeneity tests of the association between the KIR polymorphisms and susceptibility to SSc. The overall analysis did not show statistically significant association of KIR genes with SSc susceptibility. As examples, the forest plots of KIR2DP1 (A) and KIR3DL1 genes (B) are shown in Fig. 2.
Table 2

Meta-Analysis of the pooled association between KIR polymorphisms and SSc

Heterogeneity between studies was observed for the KIR2DL3 (I2 = 53%; P = 0.40) gene, while other KIR genes did not indicate any heterogeneity. Accordingly, the random- and fixed-effects models were applied to pool the result.

SSc is a multifactorial and systemic autoimmunity disorder that can lead to fibrosis and disturbance of regular organs function [32]. SSc has a strong dependency on both genetic and environment [33]. The multiplicity of genetic factors, environmental triggers, and their interactions involved in the development of SSc disease make its pathogenesis difficult to identify.

Up to now, several genes have been identified that may influence the risk of SSc development. HLA gene family is the most generally associated gene with SSc disease. An interaction between HLA molecules and KIR receptors on NK cells can mediate the recognition and elimination of defective and foreign cells [34]. Cytotoxic activity of NK cells and certain T cells are regulated with activating and inhibitory KIRs. Preceding studies revealed that the number of NK cells have been increased in the blood of SSc patients [35]. Moreover, T and NK cells phenotype and functional abnormalities were observed in SSc patients, suggesting that these cells may play a main role in the SSc pathogenesis [36, 37, 38].

Some investigations have been performed with regard to the KIR genes polymorphisms and SSc disease in populations. For instance, Momot et al. reported that the combination of KIR2DS2+/KIR2DL2− was associated with the risk of SSc disease [28]. The results of a study by Salim and colleagues also demonstrated the same results. In addition, they suggested that KIR2DL2+ might be a potential protective factor for SSc [39]. Likewise, an investigation showed that the frequency of KIR2DS3 gene polymorphism in SSc patients was more than healthy controls [30]. In another study, Mahmoudi et al. demonstrated that none of the single KIR genes affected the risk of SSc. Moreover, they reported that the combination of KIR3DL1 with HLA ligands can be a powerful marker for diagnosing of SSc [15].

As mentioned above, findings of the studies evaluating the association between KIR gene polymorphisms and the risk of SSc disease in populations are controversial. Consequently, the present meta-analysis was accomplished to quantitatively assess the relevance of KIR polymorphisms with susceptibility to SSc. In this meta-analysis, the results of five case-control studies with a total of 571 SSc cases and 796 healthy controls were integrated and evaluated. Contrary to what has been observed in previous association studies, no significant association was observed between KIR genes and the risk of SSc.

There are a number of limitations in the present meta-analysis. First, we could not perform further subgroup analysis with respect to ethnicity because of insufficient studies. Third, the meta-analysis was performed based on the data of a limited 5 studies. Therefore, this meta-analysis may have publication bias. In spite of mentioned limitations, this is the first meta-analysis focusing on the correlation between KIR genes polymorphisms and susceptibility to SSc.

In conclusion, this was the first meta-analysis of KIR genes in association with SSc. It was detected that KIR genes are not involved in conferring a susceptibility risk to SSc development.

This study was supported by a grant from Deputy of Research, Tehran University of Medical Sciences (Grant No. 98–01–41-42044).