Bulletin of the National Research Centre 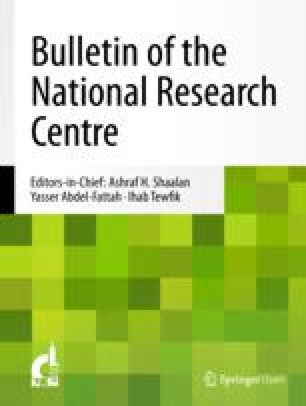 Bulletin of the National Research Centre

Trait selection for rice production under submergence stress and its effective investigation are important for sustainable improvement. Gene action is a principle, measures allelic interactions for traits that express the nature of phenotypic behavior, and leads to perfect selection of traits.

This study was aimed to measure the allelic interactions of genes responsible for different quantitative traits which have strong association with yield of submergence tolerant rice.

Rice (Oriza sativa L.) is the staple food for nearly two thirds of the world’s population. In 2010, China, India, Indonesia, Bangladesh, Vietnam, and Myanmar alone provided more than 75% of the world’s total rice production (Elke and Emanuele 2014). In South Asia, 80% of rice is produced by marginal farmers. They suffered a wide range of biotic and abiotic stresses. Among them, submergence is the most widespread abiotic stress for growth and development of rice plant (Soumya et al. 2017). Rice varieties having submergence tolerance showed low to high survival capability against deep condition, for example 10 or more days particularly in shallow water up to 40 cm depth in India and up to 50 cm depth in International Rice Research Institute, respectively (Mohanty et al. 2000). Flash floods are highly unpredictable and may occur at any growth stage of the rice crop, which may result in yield loss up to 100% depending on different climatic and agronomic factors (Setter et al. 1997). Yield is a complex and polygenic trait which is a final product affected by the large numbers of its component traits (Renukadevi and Subbalakshmi 2006). So, selection of genetically inherited traits for submergence is very important.

The genetic improvement primarily depends on the effectiveness of selection among progenies that differ in genetic value. The additive and dominant effects and their interactions are known as gene actions and are reported to be associated with breeding value (Falconer 1989). Genetic analysis using generation mean analysis (GMA) has been used to estimate the gene actions controlling the quantitative traits, and knowledge of additive, dominance, and epistatic effects would benefit breeders in designing the most appropriate breeding approaches for developing a new variety. GMA consists of six population/generations, i.e., parent 1 (P1), parent 2 (P2), first filial (F1), second filial generation (F2), first filial of the backcross with recurrent parent 1 (BC1), and first filial of the backcross with recurrent parent 2 (BC2), for estimating gene actions and linkages. GMA has been used to study the gene effects of quantitative traits, for example in chickpea (Deb and Khaleque 2009), cotton (Abd-El-Haleem et al. 2010), barley (Eshgi and Akhundova 2009), and corn (Azizi et al. 2006). As for rice, it was exploited for cooking characteristics which is controlled by additive and dominance gene actions for the selected crosses involving aromatic rice (Nikita et al. 2019). Additive and dominance gene actions were reported as important for other morplant heightological and agronomic traits such as plant height, days to flowering, panicle number per hill, panicle length, and grain yield per plant. In context of submergence tolerance of Indica rice, GMA was not yet used to estimate the gene action of quantitative traits (Nikita et al. 2019). Therefore, this study aimed to understand the gene actions of submergence tolerance traits in selected crosses and parents with different characteristics and utilize the information of gene actions that facilitate rice breeding programs in terms of illustrating the appropriate breeding methods and selection process for submergence tolerance.

The study was carried out at the Department of Genetics and Plant Breeding research field of Bangabandhu Sheikh Mujibur Rahman Agricultural University, Bangladesh, during the three consecutive growing seasons of 2016, 2017, and 2018, respectively. The crossing was accomplished in 2016 between a submergence tolerance FR 13A as a recurrent parent and local variety Chamara as donor parent. In the 2017 growing season, F1 seeds (FR 13A × Chamara) were planted, and crosses were accomplished with both parents to obtain BC1 and BC2 generations. Therefore, the six populations, P1, P2, F1, F2, BC1, and BC2, were planted in the 2018 growing season. The experiment was arranged in a randomized complete block design (RCBD) with three replications. Seventy-five plants from each P1, P2, and F1; and 100 plants from each BC1 and BC2; and 200 plants from the F2 population per replication were taken at random for subsequent measurements of the following traits: days to heading, days to maturity, plant height, internode length, no. of tillers hill−1, panicle length, no. of primary branches panicle−1, no. of secondary branches panicle−1, no. of grain panicle−1, no. of unfilled grain panicle−1, yield hill−1, yield tiller−1, and 1000 grain weight.

Mean of different generations along with standard errors of different traits are shown in Table 1 which indicated that all traits except for days to heading, days to maturity, panicle length, primary branches panicle−1, secondary branches panicle−1, no. of filled grains panicle−1, no. of unfilled grain panicle−1, and yield tiller−1 were partially dominant over lower parents. A similar result was also found by Rao et al. (2017), Singh and Singh (1974), Malik and Singh (1986), Bhadra and Dey (1985), and Malhotra (1983).
Table 1

Estimation of heterosis and inbreeding depression

The scaling test adequate to the additive-dominance model:

** indicates significant at 1% level of significance

** indicates significant at 1% level of significance

The estimates of components of genetic variance indicated that duplicate epistatic (D; 15:1) interaction (h and l having opposite sign) was predominant for all the traits except panicle length which showed complementary epistasis (C; 9:7) (h and l having same sign).

Analysis of heterosis revealed that most of the traits show duplicate type of epistasis. Duplicate epistasis is non-fixable and which cannot be exploited through the general breeding procedures of self-pollinated crops (Bhadra and Dey 1985). Even, some traits were not similar to the expected heterosis indicating the inadequacy of the model used by Mather and Jinks (1971). Positive better parent heterosis was observed by Swindell and Poehlman (1978) for plant height, 1000 grain weight, and no. of grains panicle−1. These results confirm the findings of Gawas et al. (2007).

On the other hand, the values of scales A, B, and C were non-significant for the traits, internode length, no. of grain hill−1, and 1000 grain weight. Non-significant values of A, B, and C indicated the adequacy of additive-dominance model for the inheritance of the above traits.

Results shown in Table 5 revealed that the additive component d > h was significant for all the traits except for secondary branches, indicating the predominant role of additive type of gene action for regulating the traits. The interaction parameters (i, j, and l) for panicle length was smaller than their standard errors and non-significant. Therefore, there was no evidence of non-allelic interaction for panicle length which agreed with the results from the scaling tests. Similar type of results for tiller plant−1 was reported by Murty et al. (1976). A similar gene action for inter-node length, no. of grain panicle−1, and yield plant−1 was reported by Sultan et al. (2014) and Patil et al. (2006). Singh and Singh (1972), Reddy and Sreeramulu (1982), and Wilson et al. (1985) have agreed with these findings.

From the overall results, it is clear that considerable amount of genetic variability was available for yield and its component traits in the cross. The magnitude of the different genetic component was unequal for different traits. However, the displaying significant additive effects can be used in future genetic improvement programs by capitalizing this variance. Significant additive effect along with complementary epistasis as recorded in primary branches panicle−1 indicated the possibility of exploiting the combined variability through the evolution of the parents.

Furthermore, it could be recognized that heritability estimates in broad-sense were high for all studied traits, while in narrow sense were moderate to high. These estimates are in the same line with those for different types of genetic variance. This turn leads to conclusion that these traits could be improved by the traditional breeding methods and selection could be effective mostly in early segregating generation. This was proved by entire values of the predicted genetic advances were low in most cases. Similar findings were also reported by Shivani and Reddy (2000), Gannamani (2001) and Sao (2002).

High heritability with high genetic advance indicates the control of additive gene and selection may be effective for those traits.

It may be concluded that days to heading is an additive-additive as well as additive-dominant control character and selection is important as per emergence in submergence tolerant rice Beside days to maturity and panicle length also important and selection will be effective in early segregating generation.

Conceptualization, data curation, writing, original draft preparation was done by RKG. Writing the review and the editing were done by MGR, US, AS, and MF. Supervision was done by MGR. Data analysis and visualization was performed by RKG and MGR. All authors revised, read, and approved the final manuscript.

There are currently no funding sources in the design of the study and collection, analysis, and interpretation of data and in writing the manuscript.