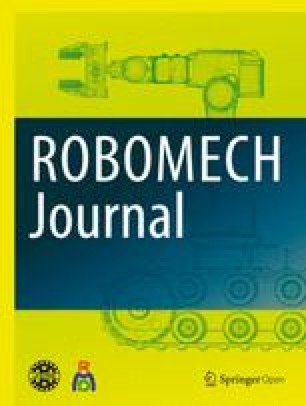 As this method uses only sound signals and it is not a SLAM problem, the proposed method have the characteristics that the sensors are inexpensive and the calculation cost are relatively low. To evaluate the proposed method, experiment were conducted. The proposed method was compared with the conventional methods, which were wheel-based odometry and self-localization using only DOA.

Overview of the proposed method

The proposed method achieves self-localization by integrating the information from wheel rotation and sound direction-of-arrival(DOA) using extended Kalman filter. DOA is estimated by microphone array which has only 4 elements. The overview of the proposed method is shown in Fig. 2. The proposed method consists of following 4 steps. The proposed method (i) execute wheel-based odometry, (ii) estimate DOA of the beacon sound using sounds recorded by the elements of the microphone array, (iii) predict the DOA of the beacon sound from estimated location and pose, and (iv) conduct self-localization by integrating all of the information. These steps are described in more detail in the following subsections.

where v and ω are measured robot velocity and angular velocities, which are measured from wheel rotation. The state of robot in time t could be calculate by the integration of the above formula.

where c represents the sound velocity.

Here atan2(x, y) represents the function which returns the angle of the position (x, y) from x-axis in the range of [−π π]. Using this equation, θ k can be estimated.

If the propagation time differences are correctly estimated, Δ τ k becomes 0. This value Δ τ k can be considered as a likelihood of the DOA estimation result. In the proposed method, if |Δ τ k | exceeds a certain threshold, the estimated DOA is regarded as inaccurate value and it is replaced by the last DOA which does not exceed the threshold.

Considering the real environment, the received signal consists of To separate these, we use the band pass filter to identify each beacon.

(iii) Prediction of the DOA from estimated location and pose

With this equation, the DOA is predicted from estimated location and pose and known sound source locations.

To examine the ability of the proposed method, three types of experiments were conducted. At first, we note the common conditions of these. In the experiments, we have supposed the house-cleaning robot and its trajectory. The sound sources layout and the trajectory of the robot are shown in Fig. 5. The experiments were executed for 10 times respectively. The sampling frequency of the velocity and angular velocity, which were obtained by wheel rotation, was 5 Hz.
The picture of the robot used in the experiment is shown in Fig. 6. On the robot, 4 elements of microphone array were placed, and the signals of them were acquired to personal computer using A-D converter. The sounds are recorded by MEMS microphone (SPU0414HR5H-SB, Knowles), which are the elements of the microphone array. The A-D converter was NI USB-6212 (National Instruments) and the sampling frequency of the A-D converter was 100 kHz. iRobot Create (iRobot Corporation) was used in the experiment. The velocity v and angular velocity ω was obtained at 5 Hz using the Open Interface of the iRobot Create. These v, ω and the signals from microphone array are used for self-localization of each method.
The distances of the elements of the microphone array d 12, d 34 were both set to be 250 mm. The sampling frequency of the microphone array was 100 kHz. 4 beacon sounds were placed on the 4 corners of the experimental environment. The band pass filters for sound sources separation were designed to have low-frequency cutoff at f L×0.99(Hz) and f H×1.01(Hz) for given sound with frequency band [ f L f H] (Hz). The filters were implemented as finite impulse response filter which has tap number of 200. Other conditions are described in Table 1. The frequencies of the sound sources were chosen by considering frequency band of background noise and sharpness of autocorrelation of signal. The level of the sound sources were adjusted to maximum volume to achieve enough signal-to-noise ratio.
Table 1

Here Δ τ 1, Δ τ 2, Δ τ 3 and Δ τ 4 are the values of equation (9) for each sound source. Each of the constants are decided preexperimentally.

The ground truth of the location and pose of the robot need to be measured for evaluating the self-localization methods. In this experiment, the measurement of the ground truth was achieved by motion capture system with 18 cameras (OptiTrack Prime 41, OptiTrack) and analysis software (Motive body, OptiTrack). The frame rate of the system was set to 120 frames per second. The robot was equipped with 8 markers on the top of it.

Conditions of experiment 1: without occlusion or reflective wave The robot runs on the trajectory without any obstacles or walls. This experiment was conducted to evaluate the localization error without these disturbances.

Wheel-based odometry We compared the proposed method to the odometry using only wheel rotation, which is one of the conventional self-localization method and also a part of the proposed method. This method estimates self-location by updating x with equation (1) for every measurement. This is the odometry using only wheel rotation. As is clear from the equation (1), the measurement errors of v and ω are not considered in this method although this method accumulates them. Because of this reason, this method has disadvantage that if there are the measurement errors on v and ω, they are accumulated over time.

When conducting (18), all DOA are assumed to be correct in this method. As mentioned before, the DOA is not always accurate as it is influenced by several disturbances such as reflective waves. Because of these reasons, the estimated location and pose of the robot is affected by the error of DOA.

Experiment 1: without occlusion or reflective wave

Figures 7 a shows an example of the self-localization results by each method for experiment 1. As we have moved the robot open loop control, the real trajectory obtained by the optical tracking is slightly different from that of Fig. 5. Figures 7 b–d shows the relation between time and self-localization errors along each axis for this experiment. The movie of the experiment and estimation are shown in Additional File 1.

From Fig. 7 b–d, we can confirm that wheel-based odometry have estimation errors which increase over time. It indicates that measured velocity and angular velocity contains certain amount of errors and these are accumulated over time as mentioned before. By contrast, the proposed method does not have the errors which increase with time and achieve the estimation around the actual values. The standard deviation of them are almost equal to that of odometry and relatively smaller than that of the self-localizaiton using only DOA.

Figure 8 shows the DOA estimation error and Δ τ k for each sound sources over time. As we have defined before, Δ τ k shows the likelihood of the DOA estimation. If the Δ τ k was large, the DOA estimation result can be considered incorrect. Δ τ k were used in R, which was shown in the equation (17) and represents the variation of observation. If Δ τ k becomes large, the corresponding element of R also becomes large and it will prevent the feedback of incorrect DOA from sound source k. By using these values, the estimation results can be stable even if the DOA error is huge. For example, the effect of it can be confirmed from Fig. 8 d. Although the DOA estimation error was huge from 0 s to 40 s for sound source 4 and Self-localization using only DOA could not estimate the correct, the error does not affect to the localization result of the proposed method as shown in Fig. 7 b–d. The other example can be found in Fig. 8 a and c. From 160 s to 200 s, the variation of the DOA error was relatively large. However, the large variation did not affect to the estimation result as the value of Δ τ k was also large.
Table 2 shows the mean and standard deviation of estimation errors of the location x,y and the pose for each methods. From the experimental results, proposed method estimated the self-location with lower drift and variation of the estimation.
Table 2

Experiment 2: occlusion of the sound source

From Fig. 9 a, we can confirm that the localization result by proposed method was similar to that of optical tracking. However, it was relatively inaccurate than that of Fig. 7 a.

The reason of these can be considered as the diffracted wave from the sound source. With the diffracted wave, the microphones will receive multiple waves at once. It makes that estimated τ 12,k and τ 34,k from them would conflict and the conflict was detected by Δ τ k . When Δ τ k was high, the proposed method suppress the feedback of sound source k. In this case, it prevented the inaccurate DOA, which was affected by obstacle to be feedbacked.

Table 3 shows the mean and standard deviation of estimation errors of the location x,y and the pose for each methods. The estimation errors are similar to that of experiment 1, and localization error increased for approximately 60 mm. From this result, we can confirm that the occlusion does not affect to the localization accuracy much if the other sound sources are not occluded.
Table 3

Figure 11 a shows an example of the self-localization results by each method for experiment 3. Overall, proposed method shows similar estimation result compared to the previous 2 experiments in this example.
Figures 11 b–d shows the relation between time and self-localization errors along each axis for this experiment. As we have moved the robot open loop control, the robot runs into wall 2 times and we have removed these results and conducted analysis with 8 trials. The estimation error of the proposed method was high at the end of the estimation. The reason of this error can be considered as reflective wave from the wall. As shown in Fig. 12, the DOA estimation error at that time was relatively high for sound source 3. Sound source 3 was facing to the center of field and its frequency was relatively high, When the robot was at the side of the sound source 3, the reflective wave from the wall could be larger than the direct wave because of its directivity. If the reflective wave was dominant in the microphone signal, the peak of the correlation function between microphones would exist at the time which represents time difference of reflective wave. In this condition, the reflective wave can be regarded as a sound source, and τ 12,k and τ 34,k did not conflict as much as that of diffracted wave in experiment 2 so that the value of the Δ τ k was not high. This problem can be solved by using omni-directional loudspeaker for the sound sources.
Table 4 shows the mean and standard deviation of estimation errors of the location x,y and the pose for each methods. The estimation error of the proposed method was relatively higher than that of experiment 1, however, it is still acceptable for house-cleaning robot.
Table 4

From these results, we can confirm that even with the obstacles or the walls, the proposed method can provide estimation result.

All authors equally contributed. All authors read and approved the final paper.