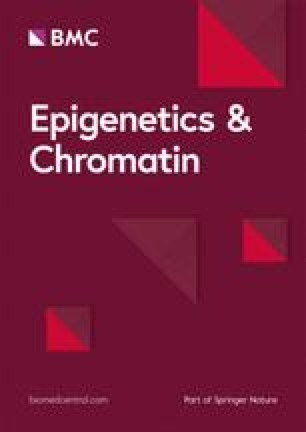 Eukaryotic genomes are organized into domains of various chromatin features including actively transcribed regions, transcription factor-bound regions, and transcriptionally repressed regions [1, 2, 3, 4]. Demarcation of chromatin domains is central to precise control and memory of gene expression patterns. Several proteins have been proposed to have activity in demarcating chromatin domains by acting as a physical boundary [5, 6], generating nucleosome-depleted regions [7], mediating long-range chromatin interactions [8, 9], or tethering chromatin to the nuclear periphery [10]. Despite intense studies [11, 12, 13, 14, 15], how chromatin domains are demarcated remains poorly understood.

The genome of nematode Caenorhabditis elegans has served as a model to study chromatin organization [3, 16, 17, 18]. The highest level of chromatin organization in C. elegans is the chromatin feature that distinguishes between the X chromosome and the autosomes. The X chromosome in C. elegans hermaphrodites is organized into large self-interacting domains that have some features shared with topologically associated domains (TADs) seen in other metazoan genomes [19, 20, 21, 22]. The five autosomes, however, lack robust self-interacting domains [22]. Instead, each autosome can be subdivided into three, megabase-wide domains, the left arm, the right arm, and the center [23]. The center domains display a low recombination rate [24, 25], a high density of essential genes [26], and low heterochromatin-associated histone modifications [16, 27]. The autosome arms are rich in repetitive elements [23] and heterochromatin-associated histone modifications [16, 27], and are associated with the nuclear membrane [18, 28, 29]. Within these generally euchromatic centers and heterochromatic arms lie kilobase-wide regions of various chromatin states including transcriptionally active and inactive regions [3, 4]. While condensins, a highly conserved class of architectural proteins [30], define the boundaries of TAD-like self-interacting domains in the X chromosome [22], the contribution of condensins to autosomal chromatin organization is unclear [14, 31]. Furthermore, CTCF, another conserved architectural protein central to defining TAD boundaries in vertebrates, is thought to be lost during the C. elegans evolution [32]. How chromatin domains and chromatin states in the C. elegans autosomes are demarcated remains an area of active investigation [4, 28, 33, 34].

The transcription factor IIIC complex (TFIIIC) is a general transcription factor required for recruitment of the RNA polymerase III (Pol III) machinery to diverse classes of small non-coding RNA genes [35]. TFIIIC has also been implicated in chromatin insulation [36, 37]. TFIIIC binds DNA sequence elements called the Box-A and Box-B motifs [35]. When participating in Pol III-dependent transcription, TFIIIC binding to Box-A and Box-B motifs results in recruitment of transcription factor IIIB complex (TFIIIB), including TATA-binding protein (TBP), which then recruits Pol III [35, 38]. By mechanisms that remain unknown, however, TFIIIC is also known to bind DNA without further recruitment of TBP and Pol III [37]. These so-called “extra-TFIIIC sites”, or “ETC”, have been identified in various organisms including yeast [39, 40], fly [41], mouse [42], and human [43]. In Saccharomyces cerevisiae and Schizosaccharomyces pombe, extra-TFIIIC sites exhibit chromatin boundary functions both as heterochromatin barriers and insulators to gene activation [40, 44, 45]. In addition, extra-TFIIIC sites in these yeast species have been observed at the nuclear periphery, suggesting a contribution to spatial organization of chromosomes [40, 46]. In fly, mouse, and human genomes, extra-TFIIIC sites were found in close proximity to architectural proteins including CTCF, condensin, and cohesin [41, 42, 43, 47]. These studies collectively suggest a conserved role for extra-TFIIIC sites in chromatin insulation and chromosome organization. However, whether extra-TFIIIC sites exist in the C. elegans genome is unknown.

C. elegans extra-TFIIIC sites are not associated with regulatory elements for protein-coding genes

C. elegans extra-TFIIIC sites are densely clustered in the distal arms of autosomes

Another mode of chromatin–nuclear envelope interactions in C. elegans is mediated by nuclear membrane-anchored, lamin-associated protein LEM-2 [28] (Fig. 5a). LEM-2 associates with the large genomic regions called “LEM-2 subdomains” that occupy 82% of the autosome arms [28]. Between LEM-2 subdomains are non-LEM-2-associated “gap” regions of various sizes [28]. We therefore investigated the locations of extra-TFIIIC sites with respect to those of LEM-2 subdomains and gaps (Fig. 5c). Strikingly, 441 of the 504 extra-TFIIIC sites (88%) were located within LEM-2 subdomains, demonstrating overrepresentation in a statistical test that accounted for the overrepresentation of extra-TFIIIC sites within autosome arms (permutation-based P < 0.001, permutation performed within chromosomal center/arm domains) (Fig. 5c, d). In contrast, Pol III-bound TFIIIC sites were underrepresented within LEM-2 associated domains (permutation-based P < 0.001, permutation performed within chromosomal domains). Together, our results suggest that C. elegans extra-TFIIIC sites are localized at the nuclear periphery and intersperse H3K9me3-marked heterochromatin regions (Fig. 5e).

The molecular mechanisms underlying the chromatin organization of C. elegans autosomes remain poorly understood. Unlike the X chromosome, which is organized into large self-interacting domains that have some features shared with topological associated domains (TADs) reported in other organisms, the autosomes do not present strong and pervasive self-interacting domains [22]. The condensin binding sites that could create boundaries between self-interacting domains in the X chromosome did not do so in the autosomes [14]. Several mechanisms for autosome chromatin organization have been proposed. These mechanisms include the antagonism between H3K36 methyltransferase MES-4 and H3K27 methyltransferase RPC2 that defines active versus repressed chromatin boundaries [4, 34]; small chromatin loops emanating from the nuclear periphery that allow active transcription within heterochromatin domains [28]; and active retention of histone acetylase to euchromatin that prevents heterochromatin relocalization [33]. Our observation that extra-TFIIIC sites are highly overrepresented in autosome arms and cluster in cis near the boundaries of H3K9me3-marked regions warrant future investigation of whether TFIIIC proteins participate in chromatin organization in C. elegans autosomes.

How strategies to demarcate chromatin domains have evolved in eukaryotes remain unclear. In vertebrates, CTCF has a central role in defining TAD boundaries and is essential for development [11, 59, 60]. In D. melanogaster, CTCF is essential but does not appear to define TAD boundaries, and instead acts as a barrier insulator [61, 62, 63]. In the non-bilaterian metazoans, some bilaterian animals (such as C. elegans), plants, and fungi, CTCF orthologs are absent [32, 64]. In contrast to CTCF, the TFIIIC proteins are conserved across eukaryotes [65] and extra-TFIIIC sites have been reported in human, [43], mouse [42], fly [41], C. elegans (this study), and yeast [39, 40]. Whether extra-TFIIIC is an evolutionary conserved mechanism for demarcating chromatin domains in eukaryotes, including those lacking a CTCF ortholog, will be an interesting subject of future studies.

ChIP-seq of TFTC-3, TFTC-5, RPC-1, and TBP-1 was performed in chromatin extracts of the mixed-stage N2-strain embryos in duplicates and have been reported in our previous publication [49]. These data sets are available at Gene Expression Omnibus (GEO; http://www.ncbi.nlm.nih.gov/geo/) with accession numbers GSE28772 (TFTC-3 ChIP and input), GSE28773 (TFTC-5 ChIP and input), GSE28774 (RPC-1 ChIP and input), and GSE42714 (TBP-1 ChIP and input). ChIP-seq datasets for H3K4me3, H3K4me1, H3K27ac, H3K9me2, and H3K9me3, performed in chromatin extracts of early-stage N2-strain embryos [3], were downloaded from ENCODE website (https://www.encodeproject.org/comparative/chromatin/).

The ce10 reference sequence was used throughout. The chromosomal domains (left arm, center, and the right arm) defined by recombination rates [24] were used.

MACS2 [66] (version 2.1.0) identified 1658 TFTC-3-enriched sites. Of those, sites that had the TFTC-3 fold-enrichment (FE) score greater than 5, harbored TFTC-5-binding sites within 100 bp, and were located in the nuclear chromosomes were considered “high-confidence” TFIIIC-bound sites (1029 TFIIIC sites). The “center” of each TFIIIC site was defined by the position of the base with the largest TFTC-3 FE score. Of the 1029 TFIIIC sites, those with the maximum Pol III (RPC-1) FE greater than 20 within ± 250 bp of the site center were defined as “Pol III-bound TFIIIC” sites (525) and the remaining sites were defined as “extra-TFIIIC” sites (504). The genomic coordinates for Pol III-bound TFIIIC sites and extra-TFIIIC sites are listed in Additional file 1.

For the heatmaps around TFIIIC sites, a set of 20-bp windows with a 10-bp offset that covered a 2-kb region centered around the center of TFIIIC sites was generated for each site. For each window, the mean of fold-enrichment score was computed from replicate-combined input-normalized fold enrichment bedgraph files. The signals were visualized using the ggplot2’s geom_raster function (version 2.2.1) in R.

To find DNA motifs de novo, 150-bp sequences centered around the center of the TFIIIC-bound sites were analyzed by MEME (version 4.11.3) [68] with the following parameters: minimum motif size, 6 bp; maximum motif size, 12 bp; and the expected motif occurrence of zero or one per sequence (-mod zoops) and with the 1st-order Markov model (i.e., the dinucleotide frequency) derived from the ce10 genome sequence as the background.

Unless otherwise noted, the overlap between the 1-bp center of each of the TFIIIC sites and genomic features of interest (with size ≥ 1 bp) was assessed using the Bedtools intersect function [67] (version 2.26.0). To estimate the probability of observing the overlap frequency by chance given the frequency, location, and size of the features of interest and TFIIIC sites, the TFIIIC sites were permutated using the Bedtools shuffle function (version 2.26.0). The TFIIIC sites were shuffled across the genome, or within the chromosomes, or within chromosomal domains in which they reside, as described in each analysis section. After each permutation, the permutated set of TFIIIC sites were assessed for the overlap with the features of interest. This permutation was repeated 2000 times to assess the frequency at which the number of intersections for the permutated set of the TFIIIC sites was greater or less than the number of intersections for the observed TFIIIC sites. If none of the 2000 permutations resulted in the number of overlaps greater or less than the observed number of overlaps, the observed degree of overlaps was considered overrepresented or underrepresented, respectively, with the empirical P value cutoff of 0.001. The mean number of overlaps after 2000 permutations was computed for visualization.

The ce10 genomic coordinate and classification of repetitive elements, compiled as the “RepeatMasker” feature, were downloaded from the UCSC genome browser. The intersection between repetitive elements and TFIIIC sites was assessed as described in “Genomic intersection and permutation” section. The permutation of TFIIIC sites was performed within the chromosomes in which they resided.

The genomic coordinates of exons, introns, and 3′-UTRs were extracted from WS264 gff3 file downloaded from wormbase. Exons, introns, and 3′-UTRs that belong to protein-coding genes (i.e., transcript type is “coding_transcript”) were processed. The genomic coordinates were transformed to the ce10 genomic coordinates as described above. The intersection between these features and TFIIIC sites was assessed as described in “Genomic intersection and permutation” section. The permutation of TFIIIC sites was performed within the chromosomal domains (see “Reference genome”).

Analysis of H3K9me2 and H3K9me3 regions

To define H3K9me2-enriched and H3K9me3-enriched regions, the genome was segmented into 1-kb windows, and the mean fold-enrichment score of H3K9me2 and H3K9me3 (see ChIP-seq dataset) was computed for each window using the Bedtools map function (version 2.26.0). Windows with the mean fold-enrichment score greater than 2.5 (1.5× standard deviation above mean for H3K9me2; and 1.3× standard deviation above mean for H3K9me3) were considered enriched for H3K9me2 or H3K9me3 and merged if located without a gap. This yielded 2967 H3K9me2-enriched regions (mean size, 2.1 kb) and 1331 H3K9me3-enriched regions (mean size, 4.9 kb).

The 223 NPP-13-binding sites identified in mixed-stage N2-stage embryos are previously reported [49]. The genomic coordinates were converted to the ce10 genomic coordinates using the UCSCtools liftOver function (version 343). The intersection between NPP-13-binding sites (± 500 bp of NPP-13 binding site center) and TFIIIC sites was assessed as described in “Genomic intersection and permutation” section. The permutation of TFIIIC sites was performed within the chromosomal domains.