Journal of the International Society of Sports Nutrition 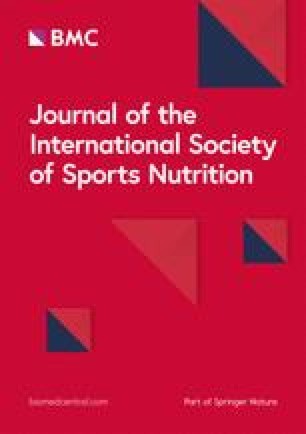 Journal of the International Society of Sports Nutrition

This study examined how consuming carbohydrate affected 2-mile time trial performance in lowlanders at HA (4300 m) before and after acclimatization.

These data suggest that carbohydrate supplementation does not enhance aerobic exercise performance in lowlanders acutely exposed or acclimatized to HA.

Data included in this Short Report were secondary analyses from a controlled feeding and exercise study that assessed the effects of high protein diets on body composition during sustained energy deficit at HA [12]. This study (clinical trials.gov: NCT02731066) was approved by the Institutional Review Board at the US Army Research Institute of Environmental Medicine (USARIEM, Natick, MA) and participants provided written informed consent. Characteristics of the 14 unacclimatized, young men included in this report were detailed by Young et al. [13].

The experimental design has been reported extensively [12, 13, 14, 15, 16]. In brief, the study was conducted over 43 consecutive days. During the first 21 days (SL), participants consumed a self-selected, weight-maintaining diet, maintained habitual exercise levels, and were free-living but visited the laboratory daily. On SL day 21, participants were flown from Boston, MA to Denver, CO where they were placed on supplemental oxygen until being driven to the summit of Pikes Peak, CO (4300 m) the following morning where they resided at the USARIEM Maher Memorial Altitude Laboratory for the next 22 days at HA. During HA, participants were under constant supervision, performed daily exercise, and consumed either standard protein (mean ± SD; 1.1 ± 0.2 g/kg/d) or high protein (2.1 ± 0.2 g/kg/d), carbohydrate-matched, energy deficient diets (40%; 30% by energy restriction and 10% by exercise). Fat was the primary manipulated macronutrient during the energy deficit, such that the standard protein group consumed 1.1 ± 0.2 g/kg/d fat, and the high protein group consumed 0.7 ± 0.1 g/kg/d fat [12]. The diet intervention resulted in a 7.9 ± 1.9 kg loss of total body mass [13].

Participants were randomized to groups and were provided equal volumes of flavor-matched carbohydrate (CHO; 65.25 g fructose + 79.75 g glucose ingested at 1.8 g/min, n = 8, 3 standard and 5 high protein) and placebo (PLA; n = 6, 4 standard and 2 high protein) beverages during 80 min of metabolically-matched, steady-state treadmill walking at SL (day 7), 5 h after arriving at HA (acute HA), and after 22 days of acclimatization and energy deficit (chronic HA, day 42). As previously reported [13] treadmill speed, grade, absolute oxygen uptake (L/min), and metabolic rate were not different across study phases. All time trials were completed at the same time of day (between 1130 and 1230) and participants were fasted prior to the start of exercise. Participants were given a 5 min rest after completing the steady-state exercise before performing a self-paced, 2-mile treadmill time trial. Peripheral oxygen saturation (SpO2; finger pulse oximetry, Model 9560; Nonin, Plymouth, MN, USA) and heart rate were assessed at baseline and in half mile intervals, and Ratings of Perceived Exertion (RPE) [17] were recorded at baseline and immediately after completing the 2-mile time trial. Participants were familiarized to the test procedures (80 min steady-state and 2-mile time trial) on three occasions before completing the SL trial on day 7. The coefficient of variation of the three familiarization time trials was 5.06%, indicating that the test-retest variation in performance was small.

As mentioned, this study was part of a larger investigation [12], powered to test the effects of dietary protein on body composition during altitude acclimatization and concomitant energy deficit. We did not expect dietary protein level to affect time trial performance at chronic HA (neither SL or acute HA were subject to the dietary protein intervention), which we confirmed using linear mixed models with dietary protein level, treatment (CHO, PLA), phase (SL, acute and chronic HA), exercise time point (for SpO2 and heart rate), and their interactions as fixed effects. Therefore, the effects of the dietary protein intervention are not presented in this report, and the data were re-analyzed using the same linear mixed-model without dietary protein in the model. Tukey’s HSD tests were used for multiple comparisons if significant main effects of interaction effects were observed. Freidman’s test was used to assess differences in RPE (baseline, end of the time trial) across study phases. Statistical significance was accepted at P < 0.05. Data were analyzed using SPSS (v.22.0; Chicago, IL, USA).

The practical implications of our findings must be interpreted in the context of certain experimental limitations. For example, it may be that carbohydrate supplementation did not improve performance due to the potential that such high carbohydrate intakes, particularly at altitude, may have reduced gastric emptying and intestinal carbohydrate absorption [19]. However, those measures were not included in our study. Likewise, our applied performance outcomes may have been strengthened if additional mechanistic measures oxygen transport capacity were included. Our design also does not allow us to completely rule out the potential effects of sustained energy deficit on time trial performance after 22 days of acclimatization. However, including fully fed, energy balance control groups was impractical and outside the scope of our study. We also contend that our findings, which show that carbohydrate supplementation failed to enhance performance following 22 days of acclimatization and concomitant energy deficit, are not only consistent with Fulco et al. [9], but are actually strengthened by our experimental design. More specifically, rather than experimentally enforcing energy balance, we assessed the putative performance enhancing effect of supplemental carbohydrate in response to the real world conditions (i.e., negative energy balance) that lowlanders typically experience during prolonged HA sojourns [10]. Most importantly, considering carbohydrate supplementation did not affect performance, and reliance on endogenous carbohydrate to fuel steady-state exercise appears to be higher during acute HA exposure than it is for absolute intensity-matched exercise at sea level [20], provides practical evidence to recommend that individuals planning to sojourn at HA to complete physically demanding work or exercise should prioritize carbohydrate intake at SL to optimize glycogen stores before ascending to HA.

We conclude that carbohydrate supplementation during steady-state exercise does not enhance exercise performance in lowlanders acutely exposed to hypoxia or sojourning at HA for 22 days.

The opinions or assertions contained herein are the private views of the authors and are not to be construed as official or as reflecting the views of the Army or the Department of Defense. Any citations of commercial organizations and trade names in this report do not constitute an official Department of the Army endorsement of approval of the products or services of these organizations.

This work was supported by the US Army Medical Research and Development Command.

The study was approved by the Institutional Review Board at the US Army Research Institute of Environmental Medicine (USARIEM, Natick, MA) and participants provided written informed consent prior to any participation in the study. The research was performed in accordance with the Declaration of Helsinki.