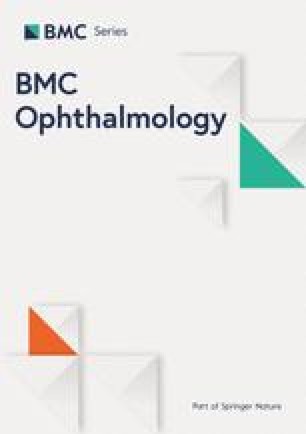 Corneal densitometry, which is also known as corneal backscattering, is a surrogate measure of corneal clarity. The purpose of the study was to investigate the changes in corneal densitometry (CD) after implanting an implantable collamer lens (ICL-V4c).

Xun Chen and Yang Shen contributed equally to this work.

The implantation of a posterior chamber implantable collamer lens (ICL) has been considered an effective procedure for myopia correction [11, 12, 13]. Since ICL implantation avoids ablating or removing corneal tissue, the integrity of the corneal structure and the stability of the corneal biomechanics are theoretically maintained; hence, ICL implantation, compared with corneal refractive surgeries, may minimize the risk of ectasia [14, 15, 16, 17, 18, 19]. However, complications such as endothelial cell damage and intraocular pressure (IOP) elevation have also been reported [20] intraoperatively or post-operatively.

ICL model V4c (ICL-V4c, STAAR Surgical Company, Monrovia, California, USA) is a modified posterior chamber ICL, which is designed with a central hole instead of iridectomy to improve aqueous humour circulation. Studies have reported that ICL-V4c and conventional ICLs (without a central hole) present similar visual outcomes [21, 22, 23, 24]. Nevertheless, surgery-associated endothelial damage, including endothelial cell trauma and endothelial oedema, may not be completely avoided [25]. Moreover, the potential intraoperative or post-operative ocular hypertension (OHT) and IOL rise may also compromise the corneal endothelial barrier and may lead to corneal oedema, affecting corneal transparency [26]. The purpose of this study was to investigate the natural course of corneal densitometry after ICL-V4c implantation.

The exclusion criteria were the following: a history of suspected keratectasia, cornea or lens opacity, retinal detachment, glaucoma, macular degeneration, or neuro-ophthalmic disease, a history of ocular surgery, inflammation or trauma, systemic disease, and pregnancy.

Ethics approval and consent to participate were obtained. This study adhered to the Declaration of Helsinki and was approved by the Ethical Committee Review Board of Fudan University Eye and ENT Hospital. Written informed consent was obtained from each patient after the procedure was thoroughly explained.

Corneal densitometry values measured from the Scheimpflug images are expressed in grey scale units (range 0 to 100) and are presented in the Average Cornea Densitometry Table (version 1.20r29). The mean densitometry values on the diameters from 0 to 2 mm and 2–6 mm of the corneas’ anterior layer (the first 120 μm of the complete corneal thickness), posterior layer (the last 60 μm of the complete corneal thickness), central layer (the volume between the anterior layer and the posterior layer), and the total layer (the volume between the epithelium and endothelium of a cornea) were analysed since densitometry measurements were much more accurate and repeatable in the central areas than in the peripheral areas [27, 28].

All ICL-V4c procedures were performed by the same surgeon (XYW) under cycloplegia (2.5% phenylephrine and 1% tropicamide, Alcon, China) and topical anaesthesia (0.4% oxybuprocaine hydrochloride, Santen, Japan). A lid speculum was used to fully expose the ocular surface after the sterilization of the ocular surface and periocular skin (povidone-iodine 5%). Then, a 3 mm incision was created at the temporal or superior corneoscleral limbus. After a viscoelastic surgical agent (1.7% sodium hyaluronate; Bausch & Lomb, China) was injected into the anterior chamber to maintain the anterior chamber depth, an ICL-V4c was inserted into the anterior chamber through the incision with an injector cartridge. An additional viscoelastic agent was then placed on the top of the ICL (between the corneal endothelium and the upper surface of the ICL-V4c), and an ICL positioning instrument was used to sweep the 4 footplates of the ICL beneath the iris. Subsequently, both the anterior chamber and the posterior chamber were irrigated thoroughly using a balanced salt solution. Finally, the overfilled perfusate was released from the incision, and the IOP was estimated with “finger touch” before the end of the procedure.

All the values are expressed as the mean ± standard deviation. Statistical analyses were performed using SPSS 19 (SPSS Inc., IBM). A normality check was conducted using the Kolmogorov–Smirnov test. A mixed linear model with Bonferroni-adjusted post hoc comparisons was used to evaluate the changes in MRSE, CD, ECD and IOP values over time. The cut-off P value was 0.05 for indicating statistical significance.

The natural course of corneal densitometry after ICL implantation

Pentacam HR was able to assess the corneal densitometry values over the annular zones of 0–12 mm; however, as most Asians’ palpebral fissures are narrow, their eyelids and eyelashes cover the peripheral areas of annuli 6–10 mm and 10–12 mm; thus, we have to analyse the zones over the annuli of 0–2 mm and 2–6 mm instead of the entire cornea. This method of measurement is a limitation of the study.

In this study, we found that at post-operative Month 12, both the MSER and visual acuity (VA) remained stable. The safety and efficacy indices were 1.19 ± 0.23 and 1.04 ± 0.27, there were no declines in BCDVA, and all the patients were satisfied with their vision, implying that ICL-V4c implantation is safe and efficient for high ametropia correction. Pérez-Vives C [35] and Ganesh S [36] investigated the differences in visual and refractive results between the ICL procedure and corneal refractive surgery. The outcomes demonstrated that the quality of vision and patient satisfaction is better with ICL than with femtosecond-LASIK. Tian Y [37] and Hyun J [38] compared the differences in visual and refractive results between ICL-V4 and ICL-V4c. Both authors found that the central hole did not significantly affect the visual and refractive outcomes. However, Eppig T et al. analysed the optical effect of the central hole on the ICL. The authors found that all the eye models showed ghost images and noted that the central hole may cause stray light rays and ghost images; however, the on-axis visual quality was mostly unaffected [39]. Additional studies are required to determine the effects of the central hole on visual quality and patient satisfaction.

Ocular hypertension (OHT) is considered one of the most commonly observed symptoms after ICL implantation. The possible causes include steroid responses, retained viscoelastic agents, acute pupillary blocks, and pigment dispersion [26]. In the current study, the IOP values changed slightly over time. The possible reasons may be as follows.

The short-term usage of steroidal eye drops and the application of an NSAID may maximally avoid steroid-related ocular hypertension, which was reported as the most common cause of OHT after ICL implantation.

As the central hole joins the anterior chamber and the posterior chamber, laser peripheral iridotomy is no longer routinely recommended before ICL-V4c implantation. Hence, the risks of pigment dispersion and acute pupillary block may be remarkably reduced. Thorough irrigation of the anterior and posterior chambers may be another key step that prevents retained viscoelastic agent-related OHT.

However, because the specular microscope evaluates ECD by analysing the central corneal image, which was taken through a central fixation area of the cornea [42, 43], peripheral endothelial damage may not be detected. Corneal densitometry assessments by using a Pentacam HR are able to detect various abnormalities in a wider zone than is a specular microscope. Corneal densitometry analysis may be employed to assess endothelial function in peripheral zones [2, 4, 9, 10].

The funding organization had no role in study design, data collection and analysis, decision to publish, or preparation of the manuscript.

This study adhered to the Declaration of Helsinki and was approved by the Ethical Committee Review Board of Fudan University Eye and ENT Hospital. Written informed consent was obtained from each patient after the procedure was thoroughly explained.