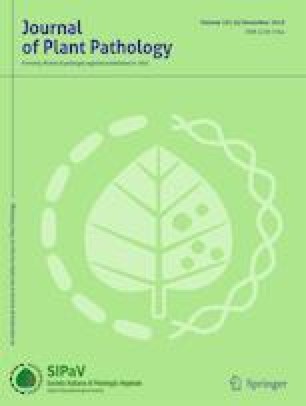 Hylodesmum podocarpum [syn. Desmodium podocarpum] is a medicinal plant in Asia. During 2015–2019, several dozen plants of H. podocarpum growing wild in Seoguipo, Korea, were found infected with a powdery mildew. Infections often caused leaf senescence and early defoliation. Voucher specimens have been deposited in the Korea University Herbarium (KUS). Conidiophores of the fungal agent causing the powdery mildew were cylindrical, measured 52–110 × 7–9 μm, and were composed of 3–4 cells with straight foot-cells 24–40 μm long. Conidia produced singly were oval to oblong-elliptical, 32–42 × 16–22 μm, and devoid of distinct fibrosin bodies. Chasmothecia were dark brown, spherical, and 90–120 μm in diameter. Each chasmothecium contained 6–10 asci. Appendages were mycelioid, flexuous, 10 to 24 per chasmothecium, 0.5 to 4 times as long as the chasmothecial diameter and yellowish at the base, hyaline in the upper part. Asci were short stalked, 4–6-spored, and 50–68 × 30–42 μm. Ascospores were hyaline, ellipsoid-ovoid, and 20–30 × 12–16 μm. The features were compatible with those of Erysiphe glycines F.L. Tai (Braun and Cook 2012). To confirm the identity of the causal fungus on KUS-F30196 (from H. podocarpum, Seoguipo, Korea, 2017) and two additional samples of F20400 (from H. podocarpum var. mandshuricum, Jinju, Korea, 2004) and F22178 (from H. podocarpum var. oxyphyllum, Pocheon, Korea, 2006), the internal transcribed spacer (ITS) regions of rDNA were amplified with the primers ITS5/P3 and sequenced. The resulting sequences were deposited in GenBank (MN420980, MN420982, and MN420981, respectively). A GenBank BLAST search revealed that the ITS sequences share 99.7–100% similarities with those of E. glycines ex Desmodium laxum (LC009948, LC028953) and ex Desmodium oxyphyllum (AB015927). Infections of E. glycines on Desmodium spp. have been known from China and Japan (Farr and Rossman 2019). To our knowledge, this is the first report of powdery mildew caused by E. glycines on H. podocarpum in Korea.

This paper was supported by research funds for newly appointed professors of Chonbuk National University in 2019 to IYC.

The authors declare no conflict of interest.