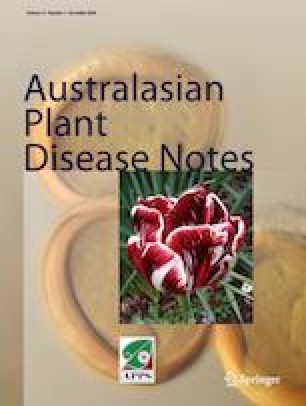 In 2018, severe bacterial blight was observed on Dracaena sanderiana plants imported and cultivated by a commercial nursery in Jinju, South Korea. This indoor plant is popularly grown for indoor air purification to prevent sick building syndrome (SBS). The diseased plants had severe blight symptoms, with leaf chlorosis and crumpling of stem and leaves. To identify the causal agent, we performed bacterial isolation, pathogenicity tests, physiological analysis, sequencing of the 16S rRNA region and recA gene, and phylogenetic analysis; the bacterial pathogen was identified as Burkholderia cepacia. This is the first report of bacterial blight on D. sanderiana caused by B. cepacia. Although there is no clear epidemiological information on the inoculum source, the recent occurrence of the disease indicates that B. cepacia is a potential threat to the production of indoor dracaena plants, which are increasingly used for air purification in SBS. Because D. sanderiana is grown in indoor living spaces, B. cepacia infection could threaten human health as well.

Okhee Choi and Yeyeong Lee contributed equally to this work.

Dracaena sanderiana, also called ‘Lucky Bamboo’ or ‘Ribbon Dracaena’, is a flowering plant in the family Asparagaceae. It is a small, shrubby plant with slim stems and flexible strap-shaped leaves. D. sanderiana is native to Cameroon in tropical West Africa, where it grows on the ground in tropical rainforests (Damen et al. 2018). It is a popular indoor plant that can survive in various indoor environments and has many cultivars (USDA, ARS 2008; Damen et al. 2018). D. sanderiana is often propagated from short cuttings in water. In Korea, it is called lucky bamboo because it is believed to bring happiness and prosperity when it is grown in houses and workplaces; this belief has made it more popular. Although it is attracting attention as an air purification plant to eliminate sick building syndrome (SBS), which is becoming a serious problem (Orwell et al. 2006; Dela Cruz et al. 2014), there are no accurate data on imports into South Korea.

In 2018, bacterial blight was observed on D. sanderiana that was grown commercially in a nursery in Jinju, South Korea. The diseased D. sanderiana had severe symptoms of blight and leaf chlorosis (Fig. 1). Since D. sanderiana is a recently imported plant, no diseases have been reported in South Korea; however, bacterial leaf spot caused by Xanthomonas campestris, and Stewart’s wilt caused by Pantoea stewartii, have been recorded in Korea (Korean Society of Plant Pathology 2009; Choi and Kim 2013).

Bacteria were isolated as described previously (Choi and Kim 2013) with some modifications. Tissues (× 5 mm) from wilted stems of plants with leaf chlorosis were added to a 1.5-ml microtube containing 0.5 ml of sterile distilled water, macerated with a pipette tip, left to soak for 10 min, and vortexed vigorously to make a suspension. A 100 μl aliquot of a 1/10 serial dilution was spread on 1/10 tryptic soy broth agar (TSBA) and incubated at 28 °C for 3 days. The resulting dominant colonies were streaked onto new TSBA. Gram-negative, rod-shaped, and non-spore forming yellow colonies of bacteria were consistently isolated from infected tissues on TSBA. The yellow colonies were circular and opaque with smooth margins, and produced non-fluorescent yellow pigment. A representative isolate was deposited in the Korean Agricultural Culture Collection (KACC 21282).

Pathogenicity tests were performed as described previously (Choi and Kim 2013) with some modifications. Three bacterial isolates including KACC 21282 were cultured on TSBA for 2 days. Bacterial suspensions (~108 CFU/ml) in sterile distilled water were inoculated on the stems and leaves of D. sanderiana purchased from nurseries using the syringe infiltration method. The inoculated plants were kept in a greenhouse at 25 °C for 10 days. Sterile distilled water was used as a negative control. The stems and leaves of D. sanderiana inoculated with the bacterial isolates showed the typical symptoms of blight (Fig. 2a) and leaf chlorosis (Fig. 2b), whereas those infiltrated with sterile distilled water showed no symptoms after 10 days. Koch’s postulates were fulfilled as the 16S rRNA gene sequence was identical for bacterial isolates with confirmed pathogenicity.

The physiological and biochemical characteristics of the bacteria were determined using the API 20NE system (BioMérieux, Marcy l’Etoile, France). The optical density of the bacterial suspension was adjusted as recommended by the manufacturer. In biochemical tests, KACC 21282 utilized d-glucose, l-arabinose, d-mannose, d-mannitol, N-acetyl-glucosamine, potassium gluconate, caprate, adipate, malate, trisodium citrate, and phenyl acetate, while it did not utilize d-maltose. The isolate was positive for catalase, oxidase, β-glucosidase, protease, and β-galactosidase, but negative for the production of arginine dihydrolase, urease, and indole. The isolate did not reduce nitrates to nitrites.

The DNA sequences (MK779203 and MK779204) were analysed using the program BLAST and compared using the NCBI/GenBank database (http://www.ncbi.nlm.nih.gov/blast/). A phylogenetic tree was generated using MEGA 4.0 with the neighbor joining method and Tajima–Nei distance model (Tamura et al. 2007). The sequences of related bacterial strains were downloaded from the GenBank database. A phylogenetic tree was constructed using partial recA sequences against the database of type strains of B. cepacia complex (Jacobs et al. 2008). These results confirmed that KACC 21282 from D. sanderiana was in the same cluster as B. cepacia (Fig. 3).

B. cepacia is reported to cause onion rot, and we also performed a pathogenicity test on onion bulbs. For onion bulb pathogenicity tests, three onion bulbs purchased from a market were each surface-disinfested with 70% ethanol, dried, and injected with 200 μl of bacterial suspension (~108 CFU/ml) of KACC 21282 using syringe infiltration. The bulbs were placed in plastic boxes at 100% relative humidity and incubated at room temperature for 7 days. Sterile distilled water was used as a negative control inoculation. KACC 21282 caused soft rot on the onion bulbs after 7 days after inoculation (Fig. 2c).

Isolates of the B. cepacia complex often cause pneumonia in immunocompromised patients with underlying lung diseases such as cystic fibrosis and chronic granulomatous diseases (Isles et al. 1984; Mahenthiralingam and Vandamme 2005). Some isolates cause bacterial soft rot on onions, while others are biological control agents with potential agricultural benefits (Parke and Gurian-Sherman 2001; Sotokawa and Takikawa 2004). The bacterium occurs naturally in various environments, including soil, the rhizosphere, urban habitats, and river water (Miller et al. 2002; Dalmastri et al. 2003; Ramette et al. 2005). Because D. sanderiana plant is grown in indoor living spaces, B. cepacia infection could pose a risk to human health. Although epidemiological information on the inoculum source is unclear, the recent occurrence of the disease indicates that B. cepacia is a potential threat to the production of indoor plants, which are increasingly used for air purification, such as in SBS.

This research was supported by Basic Science Research Program through the National Research Foundation of Korea (NRF) funded by the Ministry of Education of the Republic of Korea [2015R1A6A1A03031413].