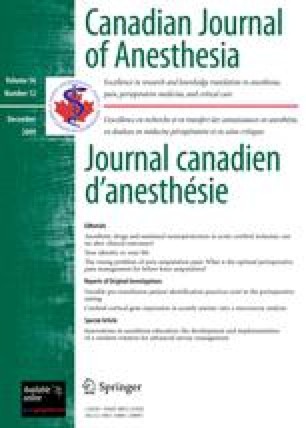 Premature Ventricular Contraction Systolic Heart Failure Anterior Leaflet Ventricular Filling Pressure Left Ventricular Outflow Tract Obstruction
These keywords were added by machine and not by the authors. This process is experimental and the keywords may be updated as the learning algorithm improves.

Transesophageal echocardiography (TEE) plays a key role in the evaluation of hemodynamic instability, particularly in the diagnosis of left ventricular outflow tract obstruction (LVOTO) where it can completely alter patient management. The purpose of these rounds is to highlight how TEE can be instrumental in ensuring a timely diagnosis of this lesion by using examples from the recent archives of the Montreal Heart Institute of hemodynamic instability secondary to previously undiagnosed LVOTO. In some cases, TEE can also serve as an invaluable tool to evaluate the response to therapy in the perioperative and critical care settings. The Research Ethics Committee of the Montreal Heart Institute granted approval for use of the related images for research and publication purposes.

An elderly male with coronary artery disease was scheduled for coronary artery bypass surgery. His primary symptom was dyspnea, and his medical history was notable for systemic hypertension. Following induction of general anesthesia, premature ventricular complexes were associated with a non-compensatory increase in arterial pressure (Fig. 1). His TEE exam revealed severe LVOTO with systolic anterior motion (SAM) of the anterior leaflet of his mitral valve (Figs. 1 and 7, Video #1 and 2). Intravenous fluids and a direct alpha agonist were given.

A young male patient with Crohn’s disease was admitted to the intensive care unit for management of septic shock. His heart rate was 120 beats · min−1 and his cardiac index was 3.4 L · min−1 · m−2 with elevated filling pressures. He required intensive pharmacologic intervention to maintain his system blood pressure. In response to the findings on TEE examination (Fig. 3), 1000 mL of Ringer’s lactate was infused and intravenous metoprolol was administered. As his heart rate (HR) gradually slowed, left ventricular filling pressures decreased gradually, as did the requirement for vasoactive support. His TEE exam showed evidence of LVOTO (Fig. 3, Video #3).

These cases illustrate four different clinical presentations of the diagnosis of LVOTO. With the ever-increasing use of echocardiography, both in the operating room and in the critical care setting, the diagnosis of LVOTO is being recognized with increasing frequency. Left ventricular outflow tract obstruction can be defined as either fixed or dynamic obstruction to ejection of blood from the left ventricle, with the obstruction located below the aortic valve but sometimes involving regions up to the ventricular apex. The term mid-cavitary or apical obstruction is used to describe the latter. Although the clinical manifestations are similar to those of left ventricular systolic dysfunction, the diagnosis of LVOTO is critical because the treatment and management are based on a very different rationale. Indeed, inotropic support, pharmacological or mechanical afterload reduction, and volume restriction used in heart failure would significantly compromise the hemodynamics of a patient presenting with a low output state from LVOTO. Despite known risk factors for LVOTO (Fig. 5), such as ventricular septal thickness >13 mm, a long posterior mitral leaflet, an anteriorly displaced coaptation point, and a mitral-aortic angle >90°,1 this condition has been observed in numerous scenarios, and we believe that it can occur in almost every type of hemodynamically unstable patient with markedly reduced left ventricular preload. In the setting of LVOTO, elevated left ventricular filling pressure will be present with flow turbulence in the left ventricular outflow tract. In some patients, this turbulence can lead to suctioning (Venturi effect) or to a drag effect2 of the anterior leaflet of the mitral valve into the left ventricular outflow tract during systole, the so-called systolic anterior motion (SAM). This will lead to mitral regurgitation, which is typically eccentric. The consequence will be a reduction in stroke volume and cardiac output with an elevated filling pressure (Fig. 6). In the presence of premature ventricular contractions (PVC), a pathognomonic feature of the arterial pressure will be present (as shown in Case 1). This is called the “Brockenbrough–Braunwald” reflex (Fig. 7).3 Normally after a PVC, the beat following the compensatory pause will have an increase pulse pressure, even in the presence of aortic stenosis (Fig. 8). In the presence of LVOTO, this normal response will be abolished, and the heartbeat following the compensatory pause will be characterized by a reduced systolic peak and pulse pressure compared with the normal heartbeat (Fig. 7). This occurs because the normal increase in contractility associated with the pause will worsen the LVOTO and result in a reduced systolic pressure. The “Brockenbrough–Braunwald” phenomenon is used by cardiologists in the hemodynamic suite as an end-point for therapeutic alcohol septal ablation in the treatment of hypertrophic cardiomyopathy. Another pathognomonic sign of LVOTO with SAM is the pulsus bisferiens. This is defined as a double systolic pressure peak per cardiac cycle. It is caused initially by the rapid left ventricular ejection and maximum flow through the aortic valve at early systole. As LVOTO appears during mid-systole, the pressure drops. The second peak is secondary to the tidal wave. It is associated with the maximum aortic pressure gradient (Fig. 9). On the TEE exam, the mid-systolic notch can be seen using M-mode (Fig. 2d). It corresponds to the partial closure of the aortic valve at mid-systole. This is followed by the delayed peak pressure associated with the second tidal wave as illustrated in Fig. 4c. Clinically, two types of LVOTO can be present; one is dynamic and the other will have underlying structural anatomical abnormalities such as those observed in hypertrophic obstructive cardiomyopathy (HOCM). In the dynamic form, tachycardia and preload reduction will predispose to LVOTO, as illustrated in Case 3. Using TEE in a series of 61 adults in the intensive care unit with unexplained hypotension for more than one hour, Heidenreich observed that LVOTO was present in 3%4 of patients.
In some patients, right ventricular failure can predispose to LVOTO with SAM, as in Case 4. In this situation, right ventricular dilatation and shifting of the interventricular septum will reduce filling of the left ventricle leading to LVOTO. This is a very difficult situation to manage, as right ventricular dysfunction is associated with poor outcome in numerous scenarios. Inotropic therapy to improve right ventricular function may worsen LVOTO. To improve right ventricular function in such a situation, we have been using inhaled pulmonary vasodilators, such as prostacyclin or nitric oxide, with reduction in LVOTO when present. Finally, extrinsic cardiac obstruction, such as tamponade after cardiac surgery, can also lead to LVOTO.5 In these situations, LVOTO will disappear as the underlying cause is removed. An algorithmic approach to LVOTO is presented in Fig. 10.

In conclusion, LVOTO may present in many different clinical situations and should be considered in the differential diagnosis of hemodynamic instability in patients with low cardiac output, high filling pressure, and unresponsiveness to conventional treatment of systolic heart failure. Echocardiography is crucial in its diagnosis and will guide the clinician to the adequate treatment.