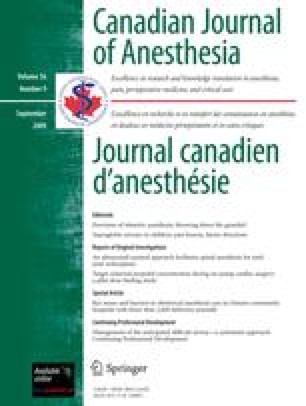 Acute abdominal compartment syndrome can be an elusive clinical diagnosis for which critical care physicians must exercise a high index of suspicion in the differential diagnosis of hemodynamic compromise and hemorrhagic shock. The purpose of these Rounds is to describe a case of abdominal compartment syndrome and to summarize the pathophysiology, differential diagnosis, etiology, and treatment of this entity. The Research Ethics Committee of the Montreal Heart Institute granted approval for use of the related images for publication purposes.

A middle-aged male was admitted to the intensive care unit (ICU) for management of lower gastro-intestinal bleeding and hemorrhagic shock. His medical history was remarkable for cirrhosis (Child-Pugh Stage C) secondary to hepatitis C, with previous ligature of esophageal varices. He also had undergone a colonoscopy with a cecal polyp resection five days earlier. The initial blood work-up showed a 6.0 g decrease in hemoglobin. The patient was mechanically ventilated and transfused with six units of packed red blood cells. Despite blood transfusion and aggressive resuscitation with crystalloids, noradrenaline was required at an infusion rate of 15 μg · min−1 to maintain a mean arterial pressure (MAP) >65 mmHg. Esophagogastric endoscopy showed no active bleeding. A colonoscopy was planned, and 4 L of an oral preparation (Golytely) were to be administered via a nasogastric tube (NGT). After 30 min and 1 L of the oral preparation had been administered, the patient’s blood pressure decreased to 50 mmHg and the noradrenaline infusion was increased to 53 μg · min−1 (Fig. 1a). The patient’s abdomen became increasingly tense and he developed anuria. His intravesical pressure at this time was 28 mmHg (Fig. 1b). A diagnosis of acute compartment syndrome (ACS) was made, and ultrasound-guided paracentesis (Figs. 2 and 3a, b) and nasogastric aspiration were performed. Two and one-half litres of ascitic fluid and 1 L of the enteral solution were removed through aspiration. Shortly after this intervention, the noradrenaline requirements decreased to 10 μg · min−1 to maintain the MAP >65 mmHg. On angiography, an intracecal bleeding site was identified and the cecal artery was embolized. The bleeding stopped and the patient later stabilized. A review of computed tomography scans of the abdomen performed one week prior to this acute event revealed signs of liver cirrhosis with portal hypertension and ascitis (Fig. 4 [videos #1 and #2 online at www.springerlink.com]). Note was made of the fact that the inferior vena cava was significantly narrowed in its intrahepatic portion.
Abdominal compartment syndrome is defined as a sustained abdominal pressure >20 mmHg with evidence of organ dysfunction relieved by abdominal decompression.1 The term intra-abdominal hypertension (IAH) is used in the presence of abdominal pressures from 12 to 20 mmHg. Increased pressure in a nonexpendable compartment reduces capillary bed perfusion and promotes bacterial translocation followed by the activation of inflammatory cytokines. The latter promotes leakage through vascular walls and edema, which further contributes to the rise in intra-abdominal pressure (IAP). The reduction in the abdominal perfusion pressure (APP), defined as the difference between MAP and IAP, leads to organ ischemia. The associated rise in abdominal pressure increases the resistance to venous return (Fig. 5). This will reduce venous return and lead to low cardiac output and shock.2 Furthermore, as the IAP increases, the diaphragm is pushed cephalad, which reduces the thoracic or the extra-pulmonary compliance. The consequences of this condition include reduced renal glomerular filtration, an oligoanuric state, hepatic dysfunction, and intestinal ischemia. Acute compartment syndrome has been shown to be an independent risk factor for mortality in the ICU.3
The risk factors of ACS are summarized in Table 1 and can be divided into three categories: diminished wall compliance, increased intra-abdominal content, and capillary leak.3,4 Clinical manifestations are non-specific and include decreased urine output, high ventilatory pressures and a tense abdomen. Monitoring the intravesical pressure is essential to establish the diagnosis (Fig. 6). In patients with IAH and ACS, the APP should be maintained above 50–60 mmHg.5 Treatment should be directed towards management of the underlying cause. Specific goals should be to improve abdominal wall compliance, reduce abdominal fluid and/or air, and to correct the positive fluid balance. The most definitive intervention is decompression laparotomy with temporary abdominal closure.6 However, this approach is not without risks and is not always curative.7 The use of diuretics, paracentesis, and dialysis can be very effective (Figs. 3 and 7).
Table 1

In this particular case, the patient’s rapid collapse can be explained by several factors for ACS. First, the narrowing of the intrahepatic vena cava is a typical finding in advanced cirrhosis (Fig. 4). Second, the esophagogastric endoscopy probably increased the IAP through air insufflation and the enteral preparation may also have contributed to the increased pressure. Third, aggressive fluid resuscitation with crystalloids could also have increased extravascular edema in the abdominal compartment with fluid redistribution. Finally, the APP was reduced by a hypotensive state associated with hemorrhagic shock. The hemodynamic instability was rapidly reversed via two mechanisms: reduction of the intraluminal and extraluminal content through the NGT drainage and bedside ultrasound-guided paracentesis. The hemorrhage was controlled through embolization of the cecal artery.

In conclusion, as illustrated by this case, ACS is a clinical entity that requires rapid diagnosis and treatment to prevent both short and long-term complications which can be fatal.