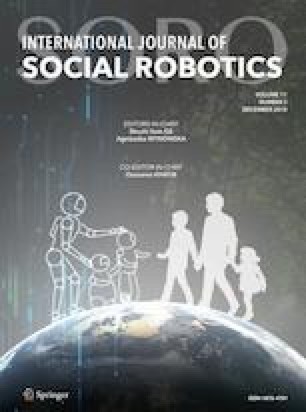 With the new year 2020, we are pleased to open the 12th volume of SORO. The first January issue of the volume marks a special epoch for our journal, as it opens the second decade of our journal’s existence. We hope that the new decade, with all the subsequent ones to come, will continue providing the social robotics community with exciting research results and inspiration for the fascinating an blossoming area of social robotics.

The Editor-in-Chiefs of SORO, Shuzhi Sam Ge, Agnieszka Wykowska and Oussama Khatib, would like to express their sincere gratitude to all members of the International Advisory Board, the Associate Editors, the Editors at Springer, the Editorial Assistants, the authors, and the reviewers for their continuous support, advice and contributions. In the new year, the editorial board will continue to work hard to keep high standards for the journal, to provide feedback to authors in short time, and efficient manner, and to continue consolidating the SORO community.

We would also like to thank all members in the Standing Committee and the International Program Committee, all editors and reviewers. The conference with the special theme “Friendly Robots” gathered a great number of passionate researchers working on the topic of social robotics, and it was abundant in inspiring and exciting talks, demos and poster presentations. It was truly a great success! The ICSR 2020 will be held in Las Vegas, USA. We look forward to meeting you there!

For the present issue of SORO, we are pleased to introduce a collection of twenty papers which include a wide range of exciting topics in social robotics.

The second paper “The humanoid robot NAO as trainer in a memory program for elderly people with Mild Cognitive Impairment” by, Olimpia Pino, Giuseppe Palestra, Rosalinda Trevino, and Berardina De Carolis evaluates the effectiveness of human–robot interaction for reinforce therapeutic behavior and treatments adherence in patients with mild cognitive impairment. Interaction with the robot increased social behavior, and improved the mood and prose memory and verbal fluency.

The third work “Peers’ experience learning for developmental robots” by Ruixuan Wei, Qirui Zhang and Zhuofan Xu proposes a peer experience learning from the robot’s perspective. Following the developmental principles of verification and embodiment, robots were able to “copy”, learn and develop behaviors from their peers during simulations. Authors discussed future research directions and implications of bioinspired models.

The following article of this issue, titled “Cognitive performance and physiological response analysis” by Roxana Agrigoroaie and Adriana Tapus analyses how two type of personalities of a robot and the personality characteristics of the participants (user’s personality, sensory profile, and morning-eveningness type) influence physiological measures during a human–robot interaction scenario. A thorough analysis of the data reveals that individual differences have an impact in human–robot interaction, observable with objective measures.

The subsequent paper “Can we keep him forever? Teens’ engagement and desire for emotional connection with a social robot,” authored by Elin A. Björling, Emma Rose, Rachel Ren, Andrew Davidson, and Dorothy Wong, collected data of perceptions about social robots from teenagers, employing group interviews after an interaction with a robot prototype. They found that teen-robot interaction is a unique area of inquiry and designing robots for teens is categorically different from other types of human–robot interaction.

The following article in this issue “Geometric intuitive techniques for human machine interaction in medical robotics” by Eduardo Bayro-Corrochano, Ana M. Garza-Burgos, and Juan L. Del-Valle-Padilla, introduces a modern and intuitive geometric language to support and to enhance the handling of different tasks in medical robot vision. The main contribution of the work is the use of conformal geometric algebra to solve some key computational issues in medical robot vision without the need to leave the mathematical framework.

The paper “How does it feel to clap hands with a robot?” by Naomi T. Fitter and Katherine J. Kuchenbecker, reports an initial exploration on how users perceive playful human–robot hand-to-hand interaction. Survey data and experiment recordings demonstrate that this interaction is viable. Factors like face expressions, speed of the arm and the timing of the response have a significant impact on the pleasantness of the interaction and on the perception of the robot.

The subsequently presented article “Toward an expressive bipedal robot: variable gait synthesis and validation in a planar model” by Umer Huzaifa, Catherine Maguire, and Amy LaViers, presents a framework for stylistic gait generation in a compass-like under-actuated planar biped model. Data show that the framework can produce visually distinguishable and meaningful gaits, laying a ground for creating a bipedal humanoid with variable socially competent movement profiles.

The paper “Generalisation of anthropomorphic stereotype” by Debora Zanatto, Massimiliano Patacchiola, Angelo Cangelosi and Jeremy Goslin reports a study which examined how trust depends on projections of anthropomorphism. The results showed that participants’ trust (measured in terms of acceptance/rejection of recommendations from a robot) depends not only on robots’ human-like characteristics, but also on previous experience. The level of anthropomorphism of a robot in previous interaction affected trust in subsequent interaction.

“Can human-inspired learning behaviour facilitate human–robot interaction?”—a paper by Alessandro Carfi, Jessica Villalobos Enrique Coronado, Barbara Bruno and Fulvio Mastrogiovanni explores a new approach to programming by demonstration in a production system in a factory scenario. The approach proposes active participation of a robot in the teaching process, an idea inspired by human–human teaching. Results show that such approach generates a more intuitive programming by demonstration.

The subsequent paper of this issue “A robot for test bed aimed at improving telepresence system and evasion from discomfort stimuli by online learning” by Masahiko Osawa and Michita Imai reports a user experience study of a hand-held telepresence robot, with head-mounted display and binaural microphone. As users often suffer from unpleasant sounds when binaural microphone is being used, the work reported here introduces an automatic system attenuating the unpleasant sounds, based on learning and adaptation to specific users.

presents a new system for recognition of human social activities, based on RGB-D data. The novelty of the approach is the use of continuous data, rather than segmented clips. The system combines temporal segmentation and classification and model for learning proximity-based priors of social activities. Such system is useful for robots navigating in the social environment.

The paper “When your robot avatar misbehaves you are likely to apologize: an exploration of guilt during robot embodiment” authored by Laura Aymerich-Franch, Sameer Kishore and Mel Slater explored the question of user’s guilt experience when an avatar embodying the user autonomously behaves in a socially incorrect manner. The results of a study addressing this question show that users might actually experience guilt feelings related to the (mis-) behaviour of their avatars, even if the behaviour was not intended by the users.

“Exploring university students’ preferences for educational robot design by means of a user-centered design approach”, a paper by Natalia Reich-Stiebert, Friederike Eyssel and Charlotte Hohnemann, reports an exploratory study on user-centered design for educational robots. The study involved university students and it showed that, according to this sample of participants, a preferred educational robot should be medium-sized with human-like characteristics. It should communicate via speech and display basic emotions. Further insights were also gained regarding the type of behavior that the robot should display. The paper highlights the importance of involving end users in the design process.

The subsequent paper of this issue is titled “Reactive chameleon: a method to mimic conversation partner’s body sway for a robot” and authored by Ryosuke Hasumoto, Kazuhiro Nakadai, Michita Imai focuses on the so-called “Chameleon effect”—the phenomenon of mimicking interaction partner’s nonverbal behaviour in a subtle and unnoticeable manner. This effect increases likeability and socialness. The authors propose a new method of implementing on a robot mimicking of interaction partner’s body sway—the “Reactive Chameleon”. The authors report that a robot equipped with such functionality was evaluated positively.

The paper “A feasibility study of a social robot collecting patient reported outcome measurements from older adults” by Roel Boumans, Fokke can Meulen, Koen Hindriks, Mark Neerincx, and Marcel Olde Rikkert reports a study which tested the usability of a robot who assists elderly patients in filling out a questionnaire on effectiveness of hospital care, the “Patient Reported Outcome Measures”. The robot was endowed with a dialogue system, supplemented by a support screen with answer options and robot gestures. The robot usability was evaluated quite high, although the dialogue system still needs to be improved. The data reliability was very high, suggesting that assistive robots can offload healthcare professionals in tasks such as collecting feedback from patients.

The following paper “Learning proxemics for personalized human–robot social interaction” authored by Pakpoom Patompak, Sungmoon Jeong, Itthisek Nilkhamhang & Nak Young Chong addresses the issue of adequate distance of a robot to an interaction partner, dependent on individual’s personal space. The authors developed a method—the social force model—for navigation with the capability of distinguishing between space where interaction is welcome, and personal space which should not be invaded, tailored to each individual person. The social force model was validated in simulations and also in experiments with a physical robot.

The final paper of the January issue is titled “Why do robots need a head? The role of social interfaces on service robots” by Conor McGinn, and it investigates the role of head-like features in the context of communication functionalities. The paper provides an overview of design choices with respect to social interfaces, focusing on the head and face specifically, and proposes a taxonomy for classifying robot social interfaces.

With this paper, we close the January 2020 issue of the International Journal of Social Robotics. We thank the authors for their inspiring contributions and we are looking forward to continuing publishing exciting work in social robotics in the next decade and beyond!