Journal of International Migration and Integration 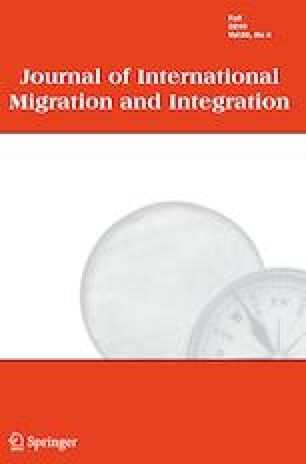 Journal of International Migration and Integration

Geography of the Midwestern Multilingual Student: the Possibility of Upward Mobility

Immigrants to the USA continue to grow more diverse by country of origin, and in location of settlement. Newcomers often settle in concentrated patterns, and questions remain about the ability of schools to provide the academic, language, and social resources these students may need for integration into American society. Many school districts in the Midwestern United States have seen an increase in the diversity of children from multilingual backgrounds as the result of immigrant and refugee settlement. Since immigrant groups settle within enclaves, there may be factors relating immigrant language background, school district quality, and upward mobility that are spatially correlated. This article uses geographic weighted regression (GWR) to examine the spatial relationship between multilingual students and indicators of opportunity structure in the St. Louis, Missouri metropolitan region. St. Louis was chosen because of its rich history of European immigration, Bosnian refugee resettlement, and intense racial segregation. Results suggest that multilingual students in the St. Louis metropolitan region are spatially concentrated, but only certain language groups are located within school districts that provide resources for possible integration and upward mobility. This analysis demonstrates the importance of examining the local context of settlement for multilingual students and the opportunity structure available to them through their school district.

Lyndsie Marie Schultz is now a Postdoctoral Fellow at the Department of Educational Leadership and Policy Analysis, University of Missouri, in Columbia, MO.

The author would like to thank Professor William F. Tate, IV and Dr. Mark Hogrebe for their support during the development of this manuscript.

Context of Reception (Portes and Zhou 1993)

Governmental policies establish the initial context of reception through policies that result in receptivity, indifference, or hostility towards immigration and ELs. Receptive policies encourage or assist the settlement of newcomers. For example, laws and diplomatic agreements such as the Bracero Program enticed Mexican farm laborers in the 1940s to fill labor shortages, and the refugee resettlement program reimburses costs associated with social and settlement services (Portes and Rumbaut 2014). Receptive policies are relatively rare in American history (Schultz 2016), as federal immigration policies are typically indifferent, or hostile. While immigration scholars characterize current federal policy as indifferent (Portes and Zhou 1993), state and local policies differ in their restrictive nature. English-only initiatives and language instruction restrictions vary by state, but seem directed towards undocumented immigrants (Abrajano & Hanjal, 2015; Wright, 2005). Proposition 203 (Prop 203) in Arizona, which requires all ELs to participate in 4 h of Structured English Immersion (SEI) instruction without regard to other academic content, is an example of locally hostile policy (Gándara & Orfield, 2010). As this dissertation will show, the context of reception EL children experience within their schools lacks uniformity across the USA.

Segmented assimilation argues that an immigrant and their children are able to assimilate into the dominant culture based on their color/race, location of settlement, and the mobility structure of the area of settlement (Portes and Zhou 1993). Specifically, immigrant ability to socially assimilate may be hampered if they are a person of color, live in urban areas, face occupational segmentation, or have poor parental resources. Segmented assimilation was the first major theory of immigrant integration to recognize the ability to access social and economic resources in the USA promotes upward mobility. This theory asserts that modern immigrants face greater challenges than previous waves in integrating within the three-generation time span. While nearly all modern immigrant groups still exhibit linguistic assimilation at the same rate as previous immigrant groups, the social and economic context they are attempting to integrate is significantly different than it was before the 1965 Hart-Celler Act eliminated national origin immigration restrictions, and therefore, the geographic location of settlement becomes highly important.

Immigrant assimilation and success is also difficult to predict due to the significant role of initial English ability in EL assimilation. Segmented assimilation provides insight to the process, according to Portes and Rumbaut (2014). Initial English language ability dictates the type of job an immigrant can attain, which then influences the community and subsequent school district placement. Immigrants typically cluster into three economic groups: workers, entrepreneurs, or professionals. Professionals usually come into the country with the highest levels of linguistic cultural capital while workers come in with the least. Further, professionals tend to settle in a more dispersed manner, while workers are often linguistically concentrated. Additionally, it has been shown that immigrants from some countries concentrate in the better school systems, while other immigrant groups are in some of the worst (Waters et al. 2010). Such concentrations may reinforce certain cumulative patterns of (dis)advantage for each immigrant group.

To combat difficult contexts of reception, Portes and Zhou (1993) argue that one of the most important resources for immigrants is the support network found through their coethnic community. Without proper support networks, it is difficult for ELs to circumvent the lack of resources and increasingly restrictive opportunity structure found in American society. Furthermore, research shows that some immigrant communities produce ethnic resources in order to enable better education outcomes for the second generation (Kasinitz et al. 2008; Zhou 2014). For example, ethnic institutions such as Chinese-language schools are established in cities across the country, including St. Louis (Zhou and Li 2003). Such schools provide social, academic, and cultural support in addition to the resources found in local school districts.

Segmented assimilation does have shortcomings. It largely assumes immigrants fall into one of three economic categories, while research shows that the composition of ELs is increasingly linguistically, ethnically, and socioeconomically diverse (Glick et al. 2013; Lee and Zhou 2015; Massey 2013). According to the Portes and Rumbaut (2014) model, only immigrants who emigrate as a professional, and settle in a dispersed manner, are likely to be fluent bilinguals in the USA. This may not always be the case. As more immigrants come to the USA for education or prestigious technology jobs, they may choose to settle closer to their ethnic community, particularly if the labor and housing markets allows the creation of an enclave. Further, according to the model, only children of entrepreneurs and professionals who grow up in strong ethnic enclaves are likely to end up as a fluent bilingual. However, there has been recent evidence that children of EL workers are quickly becoming fluent bilinguals as well (Akresh et al. 2014; Massey 2008). More research on the relationship between context of settlement and English attainment for children is needed, as fluent bilingualism has been shown to have significant cognitive and economic benefits (Portes and Rumbaut 2014; Rodríguez et al. 2014). With respect to cognitive development, protective factors have been found for EL children who are linguistically isolated in comparison to EL children who are living in a more dispersed manner, regardless of socioeconomic status (SES) (Drake 2014; Glick et al. 2013).

The table below includes all of the variables included in the article, the table name from which the data was originally obtained, the original name of the variables, and a link to download the original data used in this article. The complete dataset created for this study is available for download at Author.com.