Journal of the Academy of Marketing Science 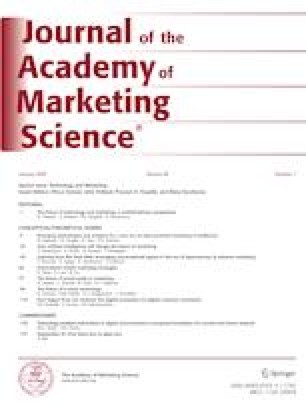 Journal of the Academy of Marketing Science

Chief marketing officer presence and firm performance: assessing conditions under which the presence of other C-level functional executives matters

This research extends understanding of the relationship between chief marketing officer (CMO) presence and firm performance by investigating how it is affected by the presence of three other functional heads (or CXOs) under various environmental and strategic contingencies. Results based on a panel of 401 U.S. manufacturers reaffirm the positive CMO presence–firm performance relationship and establish that the linkage is (a) strengthened by chief sales officer presence when industry sales volatility is high, (b) strengthened (weakened) by chief technology officer presence when industry innovation and firm differentiation (cost leadership) are high, and (c) strengthened (weakened) by chief supply chain officer presence when firm diversification (differentiation) is high. The study: expands top management team research by investigating executive dyads formed by the pairing of heads of functions advocated in the organizationally embedded view of marketing; delineates CXOs’ roles and orientations to clarify mechanisms that aid or hamper the CMO; and, identifies industry and firm-level contexts that affect the CMO–CXO interfaces. Additionally, the findings underscore the importance of appointing CMOs and, of CMOs spanning organizational silos.

V. Kumar served as Area Editor for this article.

Appendix: Operationalizing the TMT in the context of CXO research

As noted in the body of the paper while discussing our focal measures of CMO, CSO, CTO, and CSCO presence in the TMT, the operationalization of TMTs has varied in extant research. In this appendix, we elaborate on this issue, with a view to aiding future research that studies functional heads (or CXOs) and TMTs, while also justifying our measure. To that end, we include a table below that first defines three operationalizations—Executive Officers (EOs) of the Registrant; Named Executive Officers (NEOs); and Management/Leadership—in extant TMT research that has used secondary data, and then lists the pertinent issues for each of them in subsequent rows (we preclude commenting on survey-based, CEO-defined TMTs, given that such research is rare, which is not surprising given the difficulty of obtaining CEOs as respondents).

As shown in this table, EOs are the policy making executives that publicly listed US firms are required to report for the purpose of various disclosures. Notably, firms have discretion in determining what constitutes policy making, however, it is a non-trivial matter determined by the board of each firm annually, and the SEC does not question the board’s decision in this matter. NEOs are “named” in the context of compensation disclosures that are required for the CEO, the CFO, and three other most highly compensated EOs (although, firms don’t always report exactly five NEOs). Thus, to be a NEO, an executive must be an EO in the first place, making NEOs a subset of EOs, although the two lists can be identical. In addition, firms often report other significant executives in the management/leadership section (found at the beginning or end) of their glossy annual reports to shareholders, or on their websites. However, these additional executives are not EOs, and since these glossy reports are not required (firms can send the 10-K instead), they are not consistently observed; in addition, the issue with websites is that they are dynamic and not historical. Yet another approach to construe the domain of the TMT construct has been to restrict the hierarchical levels used within these lists (e.g., Senior Vice President or SVP and above); notably however, this is a judgment made by the researcher(s).

Part of the reason for different TMT operationalizations is the absence of a formal conceptual definition (Carpenter et al. 2004). As such, TMTs are part of firms’ strategic leadership, i.e., “the executives who have overall responsibility for an organization [with] substantive decision-making responsibilities” (Finkelstein and Hambrick 1996, p. 2). The common thread of research in this area is that a dominant coalition of senior executives in the firm’s upper echelons has greater influence compared to those at lower levels (as an aside therefore, this focus also covers the board of directors). In the absence of formal criteria for determining the boundary of this dominant coalition, one assumption that has resulted, is that pay equates with influence, making the highest paid executives, i.e., the NEOs for whom pay is disclosed, the most influential and equivalent to the TMT. However, we know of no conceptual basis for the SEC’s specification of five NEOs and as mentioned previously, NEOs exclude EOs who may be paid relatively less but are still policy-making executives, a problem that is likely exacerbated in the context of CXOs who may get paid less than divisional heads. Another assumption is that titles (e.g., SVP and above), which indicate hierarchy and therefore influence, confer the status of strategic leadership. However, such an assumption ignores that equating titles across firms and industries in particular, may not be accurate (Finkelstein and Hambrick 1996).

In light of the preceding discussion, we operationalize the TMT as the list of EOs since it is consistently reported, inclusive (of CXOs), and objectively measured, and recommend that future CXO-focused research follow a similar approach. Notably, such an effort needs far more manual data collection than using NEOs, who are more readily determined with the Execucomp database. However, this latter operationalization, which results in selecting a relatively smaller number of CXOs is likely to bias estimates of CXO presence or other CXO characteristics. To the extent that CXO presence is a mere control, the TMT operationalization of NEOs may be reasonable; it would of course need to be what is used for compensation-focused research as this data is available only for NEOs (see Bansal et al. 2017 who account for sample selection since NEOs are a subset of EOs). For event-type studies using CXO appointment announcements, we recommend that researchers check if the CXOs are part of the TMT, operationalized as EOs in that year’s annual filings. In these studies, if sample size is an issue and all CXOs need to be included, presence in TMT should be used as a control, an approach that can also be used if the scope of the TMT is broadened to include the additional executives reported in the glossy annual reports or websites (see last column of the table). Lastly, we note that our recommendations are limited to public firms, which are required to disclose information on their key senior executives.

aFor all practical purposes, Section 16 officers are the same as EOs, but are not reported publicly as a list like the EOs are

bStudies have also limited TMTs to specific hierarchical levels within these lists (e.g., Senior Vice President and above)

cSenior officers are defined under the Exchange Act officers who are not EOs but make or are expected to make significant contributions to the business. While they may be listed separately in the SEC filings (10-K/proxy), below the list of EOs, we found few instances of this