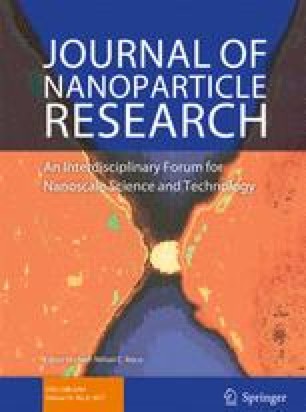 In this work, the behavior of evaporating binary-based nanofluid sessile droplets deposited on a smooth silicon substrate at different temperatures is explored. The formation of deposition patterns during the evaporation is studied by tracking particle clusters using optical microscopy. Similarly to evaporation of pure water-based nanofluid droplets, three distinctive deposition patterns are left behind the complete evaporation: a relatively uniform coverage pattern (on a nonheated surface); a “dual-ring” pattern at higher temperature, i.e., 81 °C; and a “stick-slip” pattern at 99 °C. Infrared thermography technique was employed to visualize the evolution of thermal patterns on the surface of the drying droplets. Thermal imaging shows that the evaporation of binary mixture droplets can be classified into three regimes. In the first regime, multiple convection vortices can be observed at the droplet interface, corresponding to the chaotic motion of nanoparticles captured by video microscopy. This flow regime is believed to be driven by surface tension gradients arising from local concentration gradients. As evaporation time proceeds, the number of convection vortices decreases in regime I, and a few numbers of those are left in the second regime. The flow slows down and a rapid transition (the second regime) occurs; this is followed by the last regime. At the two highest temperatures of 81 and 99 °C, the end of the transition regime is associated with the existence of two distinctive counter-rotating vortices. For the third regime, the results from both infrared thermography and video microscopy show identical behavior to those of water-based nanofluid droplets at the same substrate temperatures. This reveals that most of the more volatile component (not all) has evaporated after the first two regimes; hence, the solutal Marangoni driven by local concentration gradients is significantly weakened and has no further role in the flow structure in the last regime. Instead, the thermocapillary effect and continuity are the underlying reasons for the internal flow structure of the evaporating droplets during the last regime.

The authors are grateful for the support from the VEDECOM Institute.

This section is based on the study by Bennacer and Sefiane (2014) who estimated the evolution of the bulk and interface concentrations of ethanol for an evaporating ethanol-water mixture sessile droplet. It is well known that the more volatile component evaporates first; it diffuses from the bulk to the interface of the drop. After evaporation, the component diffuses in the form of the gas phase which is a mixture of vapor and air (Bennacer and Sefiane 2014). In order to deduce butanol concentrations and its evolution with time, the diffusion can be solved by using the convection-diffusion equation as follows:
$$ \frac{\partial C}{\partial t}+{U}_{\mathrm{c}}\nabla C={D}_{\mathrm{B}}.{\nabla}^2C $$
(1)
where C is butanol concentration; D B, the butanol diffusivity in water (in the form of the liquid phase); and U c, convective velocity of butanol.
U c can be written as follows:
$$ {U}_{\mathrm{c}}=\frac{{q\dot{v}}_{\mathrm{B}}}{S} $$
(2)
where \( q{\dot{v}}_{\mathrm{B}} \) is the mass flow rate of butanol and S, the surface area at the liquid-air interface.
S can be written as follows:
$$ S=2\pi {R}^2 $$
(3)
where R is the droplet radius.
The initial conditions are defined as follows:
$$ C={C}_0\mathrm{at}t=0. $$

The boundary conditions are as follows:

Figures 19 and 20 show the evolution of butanol concentration within the droplet and the butanol mass flow rate with time at ambient temperature, respectively. There is a good agreement in between the above model and the experimental data (at ambient temperature) which was obtained from an acoustic high-frequency echography technique (Chen et al. 2016).

The dimensionless solutal Marangoni number can be written as
$$ {M}_{\mathrm{a}}^{\mathrm{S}}=\frac{\frac{d\sigma }{dC}R}{\mu {D}_{\mathrm{B}}}\varDelta C $$
(5)
where dσ/dC is the change of the surface tension with concentration, in newton meters, ΔC is the concentration difference between the bulk and the interface, and μ is dynamic viscosity of the binary mixture, in pascal seconds.
The dimensionless thermal Marangoni number is defined as
$$ {M}_{\mathrm{a}}^{\mathrm{T}}=-\frac{\frac{d\sigma }{dT}R}{\mu \alpha}\varDelta T $$
(6)
where dσ/dT is the change of the surface tension with temperature, in newton meters per degree Celsius, ΔT is the temperature difference between the droplet edge and the center, in degrees Celsius, and α is thermal diffusivity, in square meters per second.

Surface tension was measured by means of a pendant droplet method using a drop shape analyzer (DSA30, KRÜSS GmbH, Germany). The calculation of liquid properties at different temperatures (i.e., dynamic viscosity) showed that there is a negligible change in the values in comparison with the pure binary mixture. It can be deduced that a very low concentration of nanoparticles (0.05 wt%) has no effect on pure binary mixture properties; thus, the Marangoni numbers are calculated for pure binary mixture at different temperatures. Parsa et al. (2015) have also found that there is a negligible difference between the calculated properties of CuO-water nanofluid (0.05 wt%) and pure water. Therefore, the authors calculated the Marangoni numbers for the pure water at different substrate temperatures and time.