Journal of Network and Systems Management 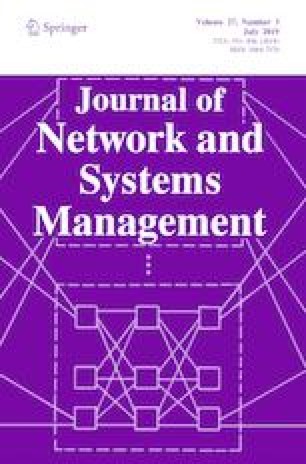 Journal of Network and Systems Management

Frost is an agro-meteorological event which causes both damage in crops and important economic losses, therefore frost prediction applications (FPA) are very important to help farmers to mitigate possible damages. FPA involves the execution of many CPU-intensive jobs. This work focuses on efficiently running FPAs in paid federated Clouds, where custom virtual machines (VM) are launched in appropriate resources belonging to different providers. The goal of this work is to minimize both the makespan and monetary cost. We follow a federated Cloud model where scheduling is performed at three levels. First, at the broker level, a datacenter is selected taking into account certain criteria established by the user, such as lower costs or lower latencies. Second, at the infrastructure level, a specialized scheduler is responsible for mapping VMs to datacenter hosts. Finally, at the VM level, jobs are assigned for execution into the preallocated VMs. Our proposal mainly contributes to implementing bio-inspired strategies at two levels. Specifically, two broker-level schedulers based on Ant Colony Optimization (ACO) and Particle Swarm Optimization (PSO), which aim to select the datacenters taking into account the network latencies, monetary cost and the availability of computational resources in datacenters, are implemented. Then, VMs are allocated in the physical machines of that datacenter by another intra-datacenter scheduler also based on ACO and PSO. Performed experiments show that our bio-inspired scheduler succeed in reducing both the makespan and the monetary cost with average gains of around 50% compared to genetic algorithms.

We acknowledge the financial support provided by ANPCyT through grants PICT-2012-2731, PICT-2014-1430 and PICT-2015-1435, and UNCuyo project project 06/B308. We want to thank the anonymous reviewers for their valuable comments and suggestions that helped to improve the quality of this paper.

SI [61] bases on studying collective behaviors that emerge from interactions between individuals and the environment which they live in to solve optimization problems. Examples of systems in which SI inspires are ants colonies, fish schools, birds flocks, and herds of land animals, where the whole group of individuals perform a desired task (i.e., feeding), which might not be made individually. For example, an ant is relatively unintelligent, but when it is part of a colony, some behaviors emerge from the interactions between ants, such as searching for food. Moreover, an individual fish makes dynamic decisions to swim in one direction or another but only up to a certain point. If there are several fishes, when the first fish swims near a food source, the other fishes will listen to the first fish instead of following other instincts.

The following subsections briefly describe the most popular SI techniques—i.e., ACO and PSO—that are widely used in job scheduling problems such as the one addressed in this paper. This appendix has been partially extracted from a paper of our own [15].

The ACO algorithm [63] arises from the way real ants behave in nature. An interesting aspect of this behavior is how ants manage to locate short paths to reach a food source from their nest. The ACO algorithm can solve computational problems since the algorithm has the ability to reduce paths and precisely to find the shortest paths. In nature, ants move randomly from one place to another to search for food. On the return to its nest each ant leaves an hormone—called pheromone—that lures other working ants to the same course. When more and more ants choose the same path, the pheromone trail is intensified and even more ants will further choose it. Over time the shortest paths will be intensified by the pheromone faster. That is because the ants will both reach the food source and travel back to their nest at a faster rate. Furthermore, if over time ants do not follow a certain path, its pheromone trail evaporates. From an algorithmic point of view, the pheromone evaporation process is useful for preventing the convergence to a local optimum solution.

Figure 6 shows two possible nest-food source paths. Figure 6a shows that ants will move randomly at the beginning and choose one of the two paths. The ants that follow the faster path will naturally get to the objective before other ants, and in doing so the former group of ants will leave a pheromone trail. Moreover, the ants that perform the round-trip faster, strengthen more quickly the quantity of pheromone in the shorter path (see Fig. 6b). The ants that reach the food source through the slower path will find attractive to return to the nest using the faster path. Eventually, most ants will choose the left path as shown in Fig. 6c.

ACO employs artificial pheromone trails that play the role of information that is dynamically updated by ants to reflect their accumulated experience in contributing to solve an entire problem. In practice, to optimize job scheduling problems, the ACO algorithm is mapped to graphical representations, usually graphs. A graph for example may include jobs and executing physical resources or machines (nodes) and scheduling decisions (arcs). Each job can be carried out by an ant to search for machines with available computing resources.

PSO [64] mimics the behavior of natural processes from animals such as birds and insects such as bees. In PSO the general term “particle” is used to represent birds, bees or any other individuals who exhibit social and group behavior. Suppose a group of bees flies over the countryside looking for flowers. Their goal is to find as many flowers as possible. At the beginning, bees do not have knowledge of the field and fly to random locations with random velocities looking for flowers. Each bee has the capability of remember the places where it saw more flowers, and moreover, somehow knows the places where other bees have found a high density of flowers. These two pieces of information—nostalgia and socialknowledge—are used by the bees to continually modify their trajectory, i.e., each bee alters its path between the two directions to fly somewhere between the two points and find a greater density of flowers.

A bee may fly over a place with more flowers than it had been found by any bee in the swarm. The whole swarm would then be drawn toward that location by considering the bees own individual discovery. In this way the bees explore the field by overflying locations with the greatest flower concentration and then being pulled back toward them. Constantly, they are checking the territory they fly over against previously found locations of highest concentration hoping to find the absolute highest concentration of flowers. Eventually, the process leads all bees to the one single place F in the field with the highest concentration of flowers. After that, bees will be unable to find any points of higher flower concentration, so they will be always drawn back to F. This social behavior is shown in Fig. 7.

When used to model job scheduling, a PSO algorithm instantiation consists of particles, each maintaining one potential solution to the entire scheduling problem. The design of the representation of a particle is different for each type of problem. An example of how to represent particles when modeling the job scheduling problem is placing the position of a particle in an n-dimensional search space. Each dimension i is the job to schedule, and the corresponding value represents the machine in which a job can be allocated. Furthermore, the global best position will indicate the best possible schedule.

Appendix B: Data Information from Weather Stations and Sensor Nodes

Table 6 illustrates the data structure used for running the FPA. This data were extracted from a raw dataset provided by the National Oceanic and Atmospheric Administration6 database. The dataset contains 10 years of atmospheric data (from 2003 to 2013) that correspond to the the weather station of the Plumerillo Airport, Mendoza. Atmospheric data are expressed in METeorological Aerodrome Report (METAR) format. METAR format is commonly used by pilots in pre-flight weather briefing and by meteorologists for weather forecasting.

Table 7 details METAR cloud coverage notation which is reported by the number of “oktas” (eighths) of the sky that is occupied by clouds. First column indicates the METAR abbreviation and the second column represents the abbreviation description. For example, in the first row of Table 6, OVC indicates that on 5/3/2003 at 06:00 am, the sky was overcast, i.e., with full cloud coverage. Regarding okta, this is a unit of measurement to describe the amount of cloud coverage at any given location, e.g., five oktas are equal to five octaves of the sky covered with clouds.
Table 7