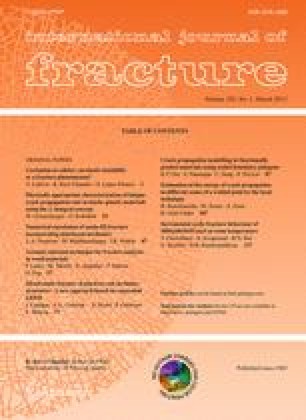 Cavitation in rubber: an elastic instability or a fracture phenomenon?

The viewpoint that cavitation in rubber—that is, the sudden growth of inherent defects in rubber into large enclosed cavities in response to external stimuli—is a purely elastic phenomenon has long been known to be fundamentally incomplete. Essentially, this is because the local stretches around the defects at which cavitation initiates far exceed the elastic limit of the rubber, which therefore ought to inelastically deform by fracturing to accommodate their growth. Yet, rather remarkably, the classical heuristic elastic criterion stating that cavitation occurs at material points wherein the hydrostatic component of the stress reaches the critical value \(P=5/2\mu \), with \(\mu \) denoting the initial shear modulus of the rubber, has been shown to agree reasonably well with a number of experimental observations. This agreement suggests that the elastic properties of rubber may play a significant—possibly even dominant—role on the occurrence of cavitation. The purpose of this paper is to provide insight into the relevance of the elastic properties of rubber on the phenomenon of cavitation. To this end, the comprehensive elastic cavitation theory recently put forward by Lopez-Pamies et al. (J Mech Phys Solids 59:1464–1487, 2011a) is directly confronted to two classical sets of experiments that to date have been understood only in part: (i) the poker-chip experiments of Gent and Lindley (Proc R Soc Lond A 249:195–205, 1959) and (ii) the experiments of Gent and Park (J Mater Sci 19:1947–1956, 1959) dealing with cavitation near reinforcing filler particles. Specifically, both sets of experiments are theoretically reproduced under the assumptions that the underlying rubber is Gaussian (for any arbitrarily large deformation) and that its inherent defects are vacuous and isotropically distributed. Results are presented for when and where cavitation occurs in the specimens as well as for the ensuing growth and interaction of the cavities once they have been “nucleated”. It is found that the elastic theoretical results are in good agreement with many of the qualitative but few of the quantitative features of the experiments. The reasons behind this remarkable partial agreement and its practical implications are discussed.

This work was supported by the National Science Foundation through Grants DMS–1009503 and CMMI–1235352.