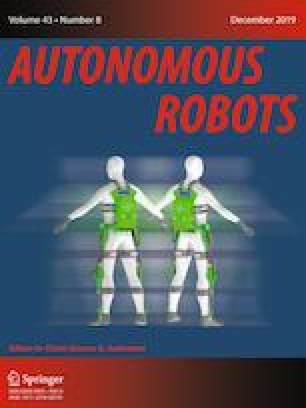 Small fixed-wing unmanned aerial vehicles (UAVs) are becoming increasingly capable of flying at low altitudes and in constrained environments. This paper addresses the problem of automating the flight of a fixed-wing UAV through highly constrained environments. The main contribution of this paper is the development of a maneuver space, integrating steady and transient agile maneuvers for a class of fixed-wing aircraft. The maneuver space is integrated into the rapidly-exploring random trees (RRT) algorithm. The RRT-based motion planner, together with a flight control system, is demonstrated in simulations and flight tests to efficiently generate and execute a motion plan through highly constrained 3D environments in real-time. The flight experiments—which effectively demonstrated the usage of three highly agile maneuvers—were conducted using only on-board sensing and computing.

This research was supported by the Natural Sciences and Engineering Research Council of Canada (Grant no. PGSD3-490220-2016) and by le Fonds de Recherche du Quebec - Nature et Technologies (Grant no. 2016-PR-191001).

This appendix outlines how a re-planning step can be incorporated into the motion planner to eliminate cumulative position errors if and when they grow sufficiently large. The actions of re-planning would neatly fit at the end of Algorithm 3, under a conditional statement that gets added to check for position error against a user-defined constant: \(\mathbf if ~e_p > \epsilon \).

Tests were run on the ODROID XU4 to evaluate the practicality of employing the re-planning step. We investigated whether the planner was efficient enough to recover from pruning almost all of the tree nodes in real-time. Using the map of Fig. 13, the motion planning algorithm was run twenty times. The planner was left to run until the Update Tree function had commanded a path that ended in the goal region; as though the aircraft were in flight and the algorithm were running in real-time. Instead of setting up the ODROID in a simulation loop with the aircraft dynamics model, we simply programmed fake position errors into the algorithm such that the re-planning step would be repeatedly triggered; for each run, the re-planning step was triggered twice. Each time the re-planning step occurred, the algorithm was able to rapidly rebuild a new tree. By the next time the Update Tree function was called after re-planning (it is called every half second), the tree would have already grown to hold approximately 1000 new nodes, on average. For reference, the tree rarely ever grew to have many more than 2000 nodes at a time, for the map in question. In the twenty runs, nineteen successfully resulted in a path to the goal region. In the one other case, the planner got stuck and had to send a command to perform the cruise-to-hover maneuver before reaching the goal region. It cannot necessarily be determined that the re-planning step was the cause of this failure. We observed that the number of tree nodes in subsequent calls of the Update Tree function, before and after re-planning, was barely affected, and thus we can at least rule out the notion of the failure being caused by a lack of trajectory options post-tree-pruning.