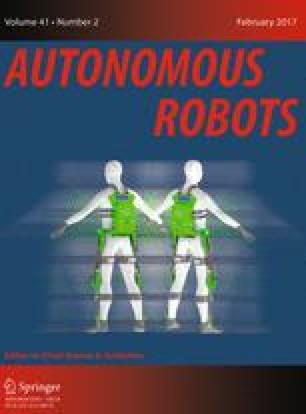 We present a vision-based approach for navigation of humanoid robots in networks of corridors connected through curves and junctions. The objective of the humanoid is to follow the corridors, walking as close as possible to their center to maximize motion safety, and to turn at curves and junctions. Our control algorithm is inspired by a technique originally designed for unicycle robots that we have adapted to humanoid navigation and extended to cope with the presence of turns and junctions. In addition, we prove here that the corridor following control law provides asymptotic convergence of robot heading and position to the corridor bisector even when the corridor walls are not parallel. A state transition system is designed to allow navigation in mazes of corridors, curves and T-junctions. Extensive experimental validation proves the validity and robustness of the approach.

In this section we analyze the perturbtion terms in Eq. (11) to prove that they are vanishing and locally Lipschitz around the equilibrium point \((x_m, x_v)=(0, 0)\).

These points, however, cannot be stable equilibria of the closed loop dynamics, as also shown in Proposition 1. In addition, considering the robot footprint with respect to the corridor width, these points can hardly be reached in practical situations. Hence, by ignoring these points, we can evaluate the perturbation terms at the equilibrium of the nominal system by setting \((x_m, x_v)=(0, 0)\) and \((x, \theta )=(0,0)\).

A quick inspection of Eq. (12) provides evidence that \(p_m\) is null at the equilibrium point \((x_m, x_v) = (0, 0)\), implying that the perturbation induced by the non-parallel corridor guidelines on the closed loop nominal dynamics is non-persistent.