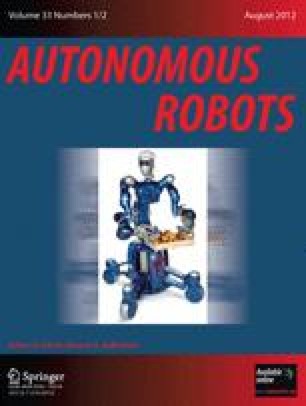 Frequently hailed for their dynamical capabilities, quadrotor vehicles are often employed as experimental platforms. However, questions surrounding achievable performance, influence of design parameters, and performance assessment of control strategies have remained largely unanswered. This paper presents an algorithm that allows the computation of quadrotor maneuvers that satisfy Pontryagin’s minimum principle with respect to time-optimality. Such maneuvers provide a useful lower bound on the duration of maneuvers, which can be used to assess performance of controllers and vehicle design parameters. Computations are based on a two-dimensional first-principles quadrotor model. The minimum principle is applied to this model to find that time-optimal trajectories are bang-bang in the thrust command, and bang-singular in the rotational rate control. This paper presents a procedure allowing the computation of time-optimal maneuvers for arbitrary initial and final states by solving the boundary value problem induced by the minimum principle. The usage of the computed maneuvers as a benchmark is demonstrated by evaluating quadrotor design parameters, and a linear feedback control law as an example of a control strategy. Computed maneuvers are verified experimentally by applying them to quadrocopters in the ETH Zurich Flying Machine Arena testbed.

This research was funded in part by the Swiss National Science Foundation (SNSF).

This appendix discusses the numerical algorithm presented in Sect. 4 in more detail, with a focus on how the individual steps were implemented. This implementation (in Matlab) of the algorithm is available for free use on the first author’s website, and is submitted along with this article.

This appendix follows the outline of Sect. 4, first introducing maneuvers containing no singular arcs in Sects. 9.1–9.3, and then showing modifications for bang-singular maneuvers in Sect. 9.4.

Figure 13 shows a flowchart diagram of the algorithm for bang-bang maneuvers, and in the following, the three steps are introduced in detail.

The choice of the number of switches is based on the user’s intuition and experience from the computation of other maneuvers. If the number is chosen too high, the algorithm can converge to the correct result by producing dispensable switching times, as discussed below. The initial guess for the duration of the maneuver T must be chosen to be too short to complete the maneuver, and can be obtained from a guess based on the vehicle’s translational acceleration capabilities, or on similar maneuvers.

After having found a bang-bang trajectory that brings the quadrotor from the initial state x 0 to the desired final state x T , it is necessary to verify that it is a solution to BVP (32). Therefore, the constant vector c=(c 1,c 2,c 3,c 4) must be determined, based on the trajectories resulting from the STO.

If the number of switches N R and N T was chosen too high, then the STO may converge to a solution containing dispensable switching times, which in fact do not represent switches. Therefore, before the constant vector c is computed, all switches at t=0 and t=T are removed, and the initial control vector u(0) is adjusted accordingly. Furthermore, two switches of the same control input, which occur at the same time, are dispensable as well and must, consequently, also be removed.

9.2.2 Conditions on the trajectory of Φ R

(46)
must hold, where the left side of the equation is computed using H≡0, i.e. by (45). The costates p 2 and p 4 are linear functions of c, and the above equation can be written as
Open image in new window

9.2.3 Conditions on the trajectory of Φ T

This linear form of the thrust switching function Φ T allows one to define N T additional linear conditions on the elements of the constant vector c, based on the conditions from (49).

For the minimum principle to be satisfied, a constant vector c that fulfills all the linear conditions to an acceptable accuracy must exist. The conditions on c derived above are therefore combined into a matrix equation, which we denote as
$$A \mathbf{c} = r. $$
(51)
The matrix A is of size (N c ×4) and the vector r has the length N c , where N c is the total number of linear conditions:
$$N_c = 2N_R + N_T + 1. $$
(52)
For all maneuvers considered here, the system of (51) is overdetermined, permitting no exact solution. Therefore, the least squares solution of (51) is computed (Bernstein 2005), which is given by
$$\mathbf{c}^* = \bigl(A^T A\bigr)^{-1} A^T r. $$
(53)
To verify that a solution to the overdetermined system of equations exists, c ∗ is substituted back into (51). If the error vector exceeds the expected numerical discrepancies,3 then the solution is considered to be invalid. In the context of the optimal control problem, this implies that there exists no constant vector c for which the minimum principle is fulfilled, and consequently the trajectories x and u resulting from the STO do not satisfy the minimum principle. A possible reason is that the chosen number of switches N R and N T and the initial values \(\{{T}_{u_{R}}\}_{ini}\) and \(\{{T}_{u_{T}}\}_{ini}\) did not cause the STO to converge to the desired maneuver. This may be corrected by varying these parameters. Another reason for the lack of a solution could be that the time-optimal maneuver for the given boundary conditions contains singular arcs, a case that will be discussed in Sect. 9.4.

If the condition matrix equation is satisfied to an acceptable accuracy, then a valid parameter vector c has been found and the parameter extraction step is complete.

To verify that BVP (32) is fulfilled and to minimize numerical errors, a last step is performed where the BVP is solved numerically: The state residual P res is minimized by varying the constant vector c and the maneuver duration T. The problem can be written as
$$\begin{array}{l@{\quad}l}\multicolumn{2}{l}{\text{minimize} \quad P_{\mathit{res}}(\mathbf{c},{T})} \\[3pt]\text{subject to} & \dot{\mathbf{x}}_a = f_a({t},\mathbf{x}_a), \\[3pt]& \mathbf{x}_a(0) = \bigl(\mathbf {x}_0,\Phi_R(0)\bigr). \\\end{array} $$
(54)
The constants c resulting from the parameter extraction and the maneuver duration T obtained by the STO are used as initial values. The optimization over the constants c and the terminal time T is carried out using a simplex algorithm. As these initial values are close to the exact solution, the BVP solver converges quickly, provided that the solution resulting from the STO is indeed a solution to the minimum principle. The initial value of the switching function Φ R (0) can be obtained by the condition H≡0, i.e. by (45), evaluated at t=0. If P res is sufficiently small after the minimization, the maneuver satisfies the boundary conditions of the final state being reached, and the algorithm has terminated successfully.

The algorithm described above is able to solve BVP (32), provided that the resulting maneuver does not contain singular arcs. In the general case, however, the time-optimal maneuver is bang-singular, and the algorithm needs to be modified to take possible singular arcs into account.

Within a singular arc, the trajectory of u R is given by (23) and depends on the constants c. Due to this dependency, computing the constants c after the STO is no longer sufficient, since they determine the singular input and have an impact on the maneuver trajectory. The parameter extraction is therefore embedded into the STO, and the resulting algorithm consists of two successive steps: Figure 14 shows a flowchart diagram of the algorithm to find bang-singular solutions.

If the solution is to satisfy the minimum principle, the optimization variables overconstrain the problem: For the solution to satisfy the optimality conditions, the control inputs must be the optimal control inputs, as specified by (24) and (30). These optimal inputs could be found using c to compute the switching functions. This is avoided, however, because the separate optimization of the switching times and c has shown to be more robust.

For bang-singular maneuvers, the sum of the state and the condition residual P res +C res is minimized during the STO. For the computation of C res , the matrix A and the vector r are required: The parameter extraction is no longer an isolated step, but needs to be performed for each evaluation of C res within the STO minimization. The parameter extraction is not used to compute the constants c (which are optimization variables), but to compute A and r.

For the parameter extraction of bang-singular maneuvers, which is needed to obtain A and r, there exist additional linear conditions that take the requirements on the switching functions within singular arcs into account.

Additional conditions on the trajectory of Φ R

Similar to the algorithm for bang-bang maneuvers, the final step is the reduction of errors through the application of a BVP solver. If the maneuver contains singular arcs, Φ R stays at zero for a nontrivial interval of time. Since the system is integrated numerically, Φ R is near zero during the singular arcs, but does not vanish completely due to numerical inaccuracies. As Φ R enters and leaves the singular arcs tangentially, defining a threshold value below which Φ R is considered to be zero is not a straightforward task. For this reason, the rotational control trajectory u R is not determined using the optimal control law (i.e. based on its switching function Φ R ), but is based on the sets \(\{{T}_{u_{R}}\}\) and \(\{{D}_{s,u_{R}}\}\). Consequently, \(\{{T}_{u_{R}}\}\) and \(\{{D}_{s,u_{R}}\}\) are optimizing variables during the BVP minimization, because they impact the control trajectory u. Further, since the switching times of u R are not determined based on the constants c, the optimal control laws are not implicitly satisfied. One must thus ensure that the condition matrix equation is fulfilled, which is the case if C res vanishes. Thus, as during the switching time optimization, the sum of the state residual P res and the condition residual C res is minimized. The BVP solver problem for bang-singular maneuvers becomes
$$\begin{array}{l@{\quad}l}\multicolumn{2}{l}{\text{minimize}\quad P_{\mathit{res}} + C_{\mathit{res}}} \\[3pt]\text{subject to} & \dot{\mathbf{x}} = f(\mathbf {x},\mathbf {u}), \\[3pt]& \mathbf {x}(0) = \mathbf {x}_0,\end{array} $$
(65)
where the control trajectory u R is computed according to the switching times and singular arc durations, and u T according to the optimal control law (30). Note that the arguments \((\{{T}_{u_{R}}\},\{{D}_{s,u_{R}}\},\mathbf{c},{T})\) of P res and C res have been omitted for reasons of clarity.
In the BVP Solver step, the N T linear conditions resulting from the thrust input are trivially satisfied, because u T is computed based on its switching function Φ T . Hence, when the matrix condition equation is computed for the evaluation of C res during the BVP minimization, it has only
$$N_{c,u_R} = 2N_R + 4N_s + 1 $$
(66)
rows, since the conditions resulting from u T can be neglected.

For bang-singular maneuvers, the BVP solver is similar to the STO. The only differences are that the thrust input u T is determined based on its control law (30), and that the maneuver duration T is an optimization variable, too, and not kept constant during the minimization of P res +C res .

If the residuals P res and C res are sufficiently small after the minimization, and if the control law for the rotational input u R is fulfilled, then the maneuver is a solution to BVP (32), and therefore satisfies the minimum principle with respect to time-optimality.