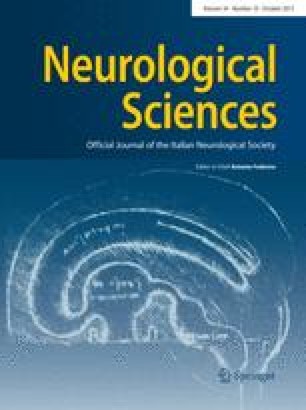 Glutamic acid decarboxylase (GAD) is involved in the metabolism of gamma aminobutyric acid (GABA). Anti-GAD antibodies (Ab) have been found in many neurological disorders [1], but also in autoimmune diseases such as type 1 diabetes mellitus, autoimmune thyroiditis and several other disorders associated under the autoimmune polyglandular syndrome-type 3 (APS-3) [1, 2].

We describe a patient suffering from a complex anti-GAD Ab-related syndrome who was consecutively treated with intravenous immunoglobulins and plasma exchange without lasting benefit. Therapy with Rituximab brought instead some sustained improvement.

A 44-year-old woman had two subsequent generalized epileptic seizures in June 1999. From the same year, she complained about tremors and muscles spasms in stressful conditions. Brain imaging and electroencephalographic (EEG) findings were normal. Treatment with sodium valproate was started, with complete control over the seizures. In October 2002, a...

Intravenous Immunoglobulin Cerebral Spinal Fluid Atrophic Gastritis Cerebellar Ataxia Sodium Valproate
These keywords were added by machine and not by the authors. This process is experimental and the keywords may be updated as the learning algorithm improves.

The present work benefited from the neuropsychological assessment of Dr. Rosalinda Cardamone and Dr. Monica Falautano; we thank Dr. Vittorio Martinelli for the clinical supervision.

Prof. Comi has served on scientific advisory boards for Bayer Schering Pharma, Merck Serono, Teva Pharmaceutical Industries Ltd., sanofi-aventis, Novartis, and Biogen Idec; has received speaker honoraria from Teva Pharmaceutical Industries Ltd., Sanofi-Aventis, Serono Symposia International, Foundation, Biogen Idec, Merck Serono, Novartis, and Bayer Schering Pharma. Dr. Baroncini, Dr. Spagnolo, Dr. Sarro and Dr. Volontè report no disclosures and they did not receive any financial support and funding. All authors have read the manuscript, the paper has not been previously published and is not under simultaneous consideration by another journal. No ghost writing by authors not named on the list.