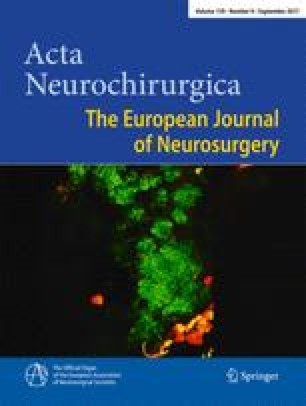 Painful spasms in facial, masticatory, and motor ocular muscles reversed after microvascular decompression of a neurovascular conflict at brainstem

The authors present a case of a 42-year-old female admitted for disabling complex and atypical bilateral facial spasms associated with painful masticatory and motor ocular dystonic movements, difficult to fit in the definition of any known cranio-facial dyskinesias. MRI showed a left PICA loop invaginated into the brainstem, considered responsible of an hyperactive disorder of the brainstem nuclei neighboring the conflict. After microvascular decompression, the patient made a full recovery with complete disappearance of the paroxystic phenomena. Such a type of image should be searched for, in an intra-axial brainstem location, in the absence of conflict in the cistern at root entry/exit zone (REZ).

No funding was received for this research.

All authors certify that they have no affiliations with or involvement in any organization or entity with any financial interest (such as honoraria; educational grants; participation in speakers’ bureaus; membership, employment, consultancies, stock ownership, or other equity interest; and expert testimony or patent-licensing arrangements), or non-financial interest (such as personal or professional relationships, affiliations, knowledge or beliefs) in the subject matter or materials discussed in this manuscript.

All procedures performed in studies involving human participants were in accordance with the ethical standards of the institutional and/or national research committee and with the 1964 Helsinki Declaration and its later amendments or comparable ethical standards. The patient gave her informed consent for publication.

The authors present an unusual case of a 42-year-old female with disabling complex and atypical bilateral facial spasms associated with painful masticatory and motor ocular dystonic movements. A PICA loop deeply indenting the brainstem was depicted on MR imaging. MVD led to an immediate complete resolution of the symptoms with a follow-up period of 3 years.

This is a very interesting and concise case report. When I see the photo, my first impression is a psychogenic disorder. I have seen patients with similar symptoms, but none had a vascular compression, not at the facial nerve exit zone nor in the brainstem. The spasms could be interrupted when the patient was asked to do other tasks and could not focus on her contractions. On the other hand, in our series of over 300 MVD for hemifacial spasm, I have seen several patients with even more severe brainstem compressions by PICA loops and all had only simple typical hemifacial spasm. Therefore, in my opinion, it is not very likely that this complex movement disorder is really caused by a hyperactive disorder of the brainstem nuclei neighboring the conflict site. Since the Babinski 2 sign was present, my favorite hypothesis is that a typical hemifacial spasm existed that was overshadowed by a psychogenic component. It would be nice if the authors could provide a preoperative video showing the spasms. A photo is difficult to interpret. This video would be more important than the operative video showing a regular MVD procedure.

Anyhow, the patient has been free of symptoms for 3 years. Who cures, is right. I thank the authors for presenting this unusual case.