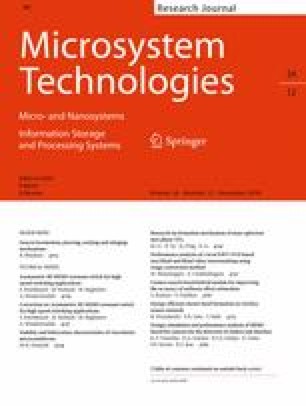 This paper presents the development of a process enabling to fabricate complex three-dimensional nickel microdevices. The possibilities offered by this new process are highlighted by the fabrication of an original electrostatic MEMS energy harvester designed to power a leadless pacemaker. The fabrication principle is based on the repetition of three main steps: the micromolding of a structural material (nickel), the electrodeposition of a sacrificial material (copper) and a mechanical planarization of the layer. Several solutions to overcome the major challenges of this original fabrication process are presented, as for example the conception of a dedicated instrumentation for polishing. This new process has enabled us to fabricate a first three-dimensional prototype of the electrostatic MEMS made of 10 layers of nickel for a total thickness of 200 µm with a minimum in-plane pattern size of 10 µm.

The research leading to these results has received funding from the European Union Seventh Framework Programme (FP7/2007-2013) under Grant Agreement no. 604360. This work was partly supported by the French RENATECH network. Fabrication was performed at the nano-centre CTU-IEF-Minerve which is partially funded by the Conseil Général de l’Essonne. We also would like to thank P. Couderc and E. Leroy from 3D Plus for laser cutting. Finally, we would like to thank P. Filloux, S. Suffit and C. Manquest of Université Paris Diderot cleanroom for their technical support.