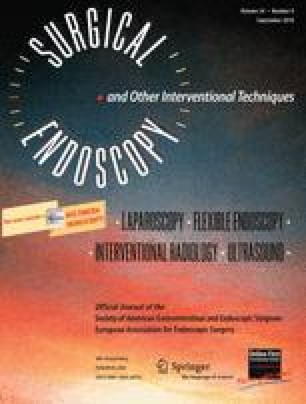 A 75-year-old woman with a body mass index of 24 underwent surgery by two colorectal surgeons who had hundreds of experiences with laparoscopic colorectal surgery. Three 5-mm ports were placed linearly in the vertical 2-cm skin incision in the umbilicus. Almost all the procedures were performed with usual laparoscopic instruments such as a 5-mm flexible laparoscope and the Harmonic ACE (Ethicon Endo-Surgery, Cincinnati, OH, USA). Also, the operative procedures were much the same as in usual laparoscopic surgery. The sigmoid colon was mobilized using a medial approach. Then the root of the superior rectal artery and inferior mesenteric vein were divided using the EnSeal tissue sealing and hemostasis system (SurgRx, Inc. Redwood City, CA, USA). Low-profile trocars were mandatory to minimize interferences among instruments. The rectum was divided 5 cm distal to the lesion with one firing of an endoscopic stapler. The specimen was extracted through a 2-cm transumbilical laparotomy. End-to-side anastomosis using a circular stapler was performed intraabdominally, and air tightness was confirmed by the anastomotic leak test.

The operative time was 192 min. There was no intra- or postoperative morbidity. Altogether, 20 cm of sigmoid was resected with negative tumor margins, and 14 lymph nodes were harvested. The patient started receiving meals and was discharged on postoperative days 2 and 7, respectively. The final pathology showed Tis, N0, M0, stage 0. The scar was invisible at 1 month.

Single-incision laparoscopic colectomy is feasible and safe for selected patients and gives a favorable cosmetic result. By well-trained surgeons, this technique could be a realistic option for colorectal cancer surgery.