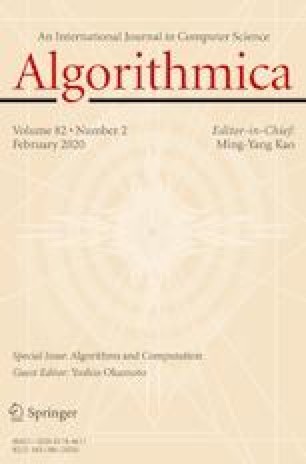 We consider two optimization problems in planar graphs. In Maximum Weight Independent Set of Objects we are given a graph G and a family \({\mathcal {D}}\) of objects, each being a connected subgraph of G with a prescribed weight, and the task is to find a maximum-weight subfamily of \({\mathcal {D}}\) consisting of pairwise disjoint objects. In Minimum Weight Distance Set Cover we are given a graph G in which the edges might have different lengths, two sets \({\mathcal {D}},{\mathcal {C}}\) of vertices of G, where vertices of \({\mathcal {D}}\) have prescribed weights, and a nonnegative radius r. The task is to find a minimum-weight subset of \({\mathcal {D}}\) such that every vertex of \({\mathcal {C}}\) is at distance at most r from some selected vertex. Via simple reductions, these two problems generalize a number of geometric optimization tasks, notably Maximum Weight Independent Set for polygons in the plane and Weighted Geometric Set Cover for unit disks and unit squares. We present quasi-polynomial time approximation schemes (QPTASs) for both of the above problems in planar graphs: given an accuracy parameter \(\epsilon >0\) we can compute a solution whose weight is within multiplicative factor of \((1+\epsilon )\) from the optimum in time \(2^{{\mathrm {poly}}(1/\epsilon ,\log |{\mathcal {D}}|)}\cdot n^{{\mathcal {O}}(1)}\), where n is the number of vertices of the input graph. We note that a QPTAS for Maximum Weight Independent Set of Objects would follow from existing work. However, our main contribution is to provide a unified framework that works for both problems in both a planar and geometric setting and to transfer the techniques used for recursive approximation schemes for geometric problems due to Adamaszek and Wiese (in Proceedings of the FOCS 2013, IEEE, 2013; in Proceedings of the SODA 2014, SIAM, 2014) and Har-Peled and Sariel (in Proceedings of the SOCG 2014, SIAM, 2014) to the setting of planar graphs. In particular, this yields a purely combinatorial viewpoint on these methods as a phenomenon in planar graphs.

The work of Mi. Pilipczuk on these results was, at the initial stages, partially supported by Polish National Science Centre grant UMO-2013/11/D/ST6/03073, and, at the later stages, was a part of project TOTAL that has received funding from the European Research Council (ERC) under the European Union’s Horizon 2020 research and innovation programme (Grant Agreement No. 677651). The research of A. Wiese is supported by the Millennium Nucleus Information and Coordination in Networks ICM/FIC RC130003 and by the grant Fondecyt Regular 1170223.

We thank Dániel Marx for insightful discussions on the approach to optimization problems in geometric and planar settings via Voronoi diagrams.

We now prove that the abovementioned results follow from Theorems 1 and 2 via simple reductions from the geometric to the planar setting; the exception is that for WGSR we can tackle only unit disks and unit squares instead of general pseudo-disks. These reductions were already observed by Marx and Pilipczuk in [5], who used them for the parameterized variants of the problems. We give them for completeness.

Before we proceed to proving the statements above, let us first give a general-use definition of the crossing graph of a point set in the plane; see Fig. 7. Consider a finite set of points X in the plane and a metric \(d(\cdot ,\cdot )\) on the plane induced by some norm (i.e. \(d(x,y)=\Vert x-y\Vert \) for some norm \(\Vert \cdot \Vert \)). By \(G\langle X,d\rangle \) we denote a graph defined as follows. For every pair of distinct points \(a,b\in X\), draw the segment with endpoints a and b in the plane. Let \(Y\supseteq X\) be the set consisting of X and all intersections of all the segments drawn; then set Y to be the vertex set of \(G\langle X,d\rangle \). Two points \(x,y\in Y\) are connected by an edge in \(G\langle X,d\rangle \) if they are two consecutive points from Y on any of the drawn segments; that is, the segment connecting x and y is contained in one of the segments connecting pairs of vertices from X, and there is no other point from Y inside this segment. The length of this edge is set to d(x, y). Note that \(G\langle X,d\rangle \) has at most \(|X|^4\) vertices, is planar with a straight-line embedding described above, and for every two vertices \(a,b\in X\) we have \({\text {dist}}_{G\langle X,d\rangle }(a,b)=d(a,b)\).

Let \({{\mathcal {P}}}\) be the given weighted set of polygons and let X be the set of all their vertices; then \(|X|=n\). Consider the graph \(G=G\langle X,d_\infty \rangle \); note that G has at most \(n^4\) vertices. For every polygon \(P\in {{\mathcal {P}}}\) construct a corresponding object p in G defined as follows: p is the subgraph of G induced by all the vertices of G whose embeddings are contained in P. It is easy to see that p defined in this manner is connected. The weight of p is equal to the weight of P. Let \({\mathcal {D}}\) be the family comprising all the constructed objects. It readily follows that sets of pairwise disjoint polygons from \({{\mathcal {P}}}\) are in one-to-one correspondence with independent subfamilies of \({\mathcal {D}}\), hence it suffices to apply the algorithm of Theorem 1 to the instance \((G,{\mathcal {D}})\). \(\square \)