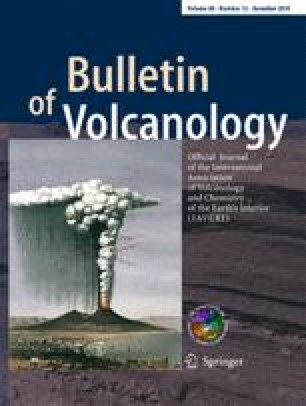 Understanding the dynamics and effects of hydrothermal eruptions is crucial to the hazard assessment in both volcanic and geothermal areas. Eruptions from hydrothermal centres may occur associated with magmatic phases, but also as isolated events without magmatic input, with the most recent examples being those of Te Maari (Tongariro, New Zealand) in 2012 and Ontake (Japan) in 2014. The most recent caldera of the Island of Vulcano (southern Italy) hosts in its centre the La Fossa cone, active since 5.5 ka and now characterised by continuous fumarolic degassing. In historical times, La Fossa cone has experienced several hydrothermal eruptions, with the most violent event being the Breccia di Commenda eruption that occurred during the thirteenth century ad. Based on analysis of 170 stratigraphic logs, we show that the Breccia di Commenda eruption occurred in three main phases. After an opening, low-intensity ash emission phase (phase 1), the eruption energy climaxed during phase 2, when a series of violent explosions produced an asymmetric shower of ballistic blocks and the contemporaneous emplacement of highly dispersed, lithic-rich, blast-like pyroclastic density currents (PDCs). The tephra units emplaced during phase 2, ranging in volume from 0.2 to 2.7 × 105 m3, were covered in turn by thin ash fall deposits (phase 3). The dynamics of the most violent and intense stage of the eruption (phase 2) was investigated by numerical simulations. A three-dimensional numerical model was applied, describing the eruptive mixture as a Eulerian–Eulerian, two-phase, non-equilibrium gas-particle fluid (plus a one-way coupled Lagrangian ballistic block fraction). At the initial simulation time, a mass of about 109 kg, with initial overpressure above 10 MPa, and a temperature of 250 °C, was suddenly ejected from a 200-m-long, eastward inclined, NNE–SSW trending fissure. The mass release formed blast-like PDCs on both sides of the fissure and launched ballistic blocks eastwards. Field investigations and numerical simulations confirm that hydrothermal explosions at La Fossa cone include intense ballistic fallout of blocks, emission of PDCs potentially travelling beyond the La Fossa caldera and significant ash fallout. The hazard associated with both ballistic impact and PDC ingress, as associated with hydrothermal eruption, is significantly larger with respect to that associated with Vulcanian-type events of La Fossa.

C. Bonadonna was supported by the Swiss National Science Foundation (subside no. 200021-129997). The authors are grateful to R. Fusillo (Univ. Bristol) for assistance during the fieldwork. F. di Traglia was supported by a post-doctoral fellowship founded by the ‘Università degli Studi di Firenze—Ente Cassa di Risparmio di Firenze’ (D.R. n. 127804 (1206), 2015). The authors are grateful to the ‘INGV-Sezione di Palermo’ staff, especially to P. Madonia, for the logistic support at the ‘M. Carapezza’ Volcanological Observatory (Island of Vulcano) during field activities. L. Gurioli and C. Montanaro are acknowledged for their careful and constructive reviews which greatly enhanced the quality of the manuscript, and Pierre-Simon Ross for editorial handling.

The Eulerian–Eulerian multiphase flow model formulation has been modified from Neri et al. (2003) for one single particulate class, representing fine ash. For the two-phase gas–particle mixture, the following transport equations for mass, momentum and energy are solved. All symbols and units are defined in Appendix 4.

The two phases are treated as interpenetrating continua. Their volume fractions obey the closure equation:
$$ {\alpha}_g+{\alpha}_s=1 $$
The thermal equation of state of the gas phase is that of perfect gases. Particle density is constant.
$$ {\displaystyle \begin{array}{r}{\rho}_g={\rho}_g\left(P,{T}_g\right)\\ {}{\rho}_s=\mathrm{constant}\end{array}} $$
The frictional and collisional momentum dissipation terms in the particle stress tensors are neglected because they are negligible in the mixture expansion phase and in the dilute regime of pyroclastic flow propagation (Esposti Ongaro et al. 2016). Although they can be important in the basal layer and in the stopping regime of pyroclastic flow emplacement, we have neglected them to speed computation up. Stress terms have been switched on in a couple of runs to ensure that their effect was negligible on large-scale dynamics. On the contrary, turbulent sub-grid stress terms have always been included. For both the gas and particles, the stress tensor is written in a Newtonian form:
$$ {\displaystyle \begin{array}{l}{\mathbf{T}}_{\mathrm{i}}=-2{\mu}_{\mathrm{eff}}{\mathbf{S}}_{\mathrm{i}}\hbox{--} {\lambda}_{\mathrm{i}}\left(\nabla \cdot {\mathbf{U}}_{\mathrm{i}}\right)\mathbf{I}\\ {}{\mathbf{S}}_{\mathrm{i}}=\frac{1}{2}\left(\nabla {\mathbf{U}}_{\mathrm{i}}+\nabla {{\mathbf{U}}_{\mathrm{i}}}^{\mathrm{T}}\right)-\frac{1}{3}\left(\nabla \cdot {\mathbf{U}}_{\mathrm{i}}\right)\mathbf{I}\end{array}} $$
where the subscript (i) indicates either gas or particles and νeff is the effective viscosity coefficient (μeff = μ + μturb), and is the sum of the molecular/granular viscosity μ (equal to 1.84 × 105 Pa s, for gas, and to zero for particles) and the turbulent (subgrid) turbulent coefficient.
The heat flux is expressed through Fourier’s law, for both gas and particles:
$$ {\mathbf{q}}_{\mathrm{i}}=-{\rho}_i\left({D}_i+\frac{\nu_{\mathrm{turb}}}{\mathit{\Pr}}\right)\frac{C_{P,i}}{C_{V,i}}\nabla {e}_{\mathrm{i}} $$
where Pr is the turbulent Prandtl number, set equal to 0.7 for gas and 1 for particles and νturb = μturb/ρi.

The Eulerian–Eulerian model is solved by means of a segregated, semi-implicit solution algorithm implemented in the twoPhaseEulerFoam application of OpenFOAM (www.openfoam.org, version 4.1). The original solver has been modified by the authors to account for atmospheric vertical stratification.

The numerical solver adopted in this work is based on a Lagrangian approach for the larger clasts (de’ Michieli Vitturi et al. 2010; Del Bello et al. 2017), using the KinematicCloud class implemented in OpenFOAM. In the present application, the Lagrangian trajectories are calculated by imposing a one-way coupling with the continuous phases (gas and fine particles), i.e. Lagrangian particles are influenced by the fluid field but their mass fraction is low enough to neglect their influence on the fluid.

De’ Michieli Vitturi et al. (2010) already demonstrated that, in the initial stages of a Vulcanian eruption, the pressure gradient terms are of the same order of magnitude as the drag term. In our work, we thus included the pressure gradient in the Lagrangian equations and noticed that this term is a fundamental one to correctly estimate the ballistic ranges. Neglecting the pressure gradient entails a decrease of the maximum distance reached by 30 cm particles by about 25% (i.e. from 1.90 to 1.45 km).

The pressure gradient force is written as:
$$ {\mathbf{F}}_G=-\frac{m_P}{\rho_P}\nabla P $$
All force terms are first computed at the centres of the computational cells and then linearly interpolated at the particle position to update particle velocity. Finally, new particle positions are obtained by integration of the velocity:
$$ \frac{d{\mathbf{x}}_p}{dt}={\mathbf{U}}_p $$

The Digital Elevation Model (DEM) represents the present topography of the Vulcano island, with the crater filled up to the rim (Fig. C1a). At time t = 0, the eruptive mixture is confined within a shallow fissure excavated in the crater area. To reproduce the observed spreading in East-Southeast directions, the fissure was oriented N35°E, the inner profile was asymmetrically opened towards Southeast (Fig. C1b) and ballistic particles where located along the southeastern margin of the fissure. It is worth remarking that asymmetric ballistic launch can be produced in natural systems by an oriented fissure or an inclined jet but, in our application, it was not possible to test such a geometry. In any case, our study demonstrates that ballistic particles ejected towards the East-Southeast can reach, with the selected initial conditions, the observed ranges.

The DEM was converted in STL format and the computational grid was adapted to the topography by using the snappyHexMesh utility, implemented in OpenFOAM 4.1. The computational domain is extended 4.6 km in the x direction (West-East), 4.3 km in the y direction (South-North) and 2.5 km vertically. An initial coarse, rectilinear uniform mesh (with 100 m resolution in all directions) was refined in two steps, to obtain a 25-m resolution at the ground surface. Two terrain-following layers were then added, with an average vertical resolution of 10 m. Such a local refinement allowed to have enough resolution to resolve the large-scale features of dilute and thick pyroclastic density currents (Esposti Ongaro et al. 2016), while keeping affordable the number of computational cells (~ 280,000) and the simulation time (~ 3 h) for simulation on a Intel i5 4-cores (3.2 GHz) PC.