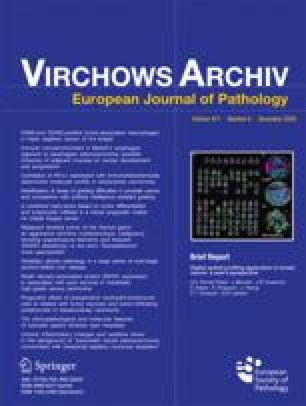 Evidence for two modes of allelic loss: multifocal analysis on both early and advanced gastric carcinomas

To assess the extent and the timing of allelic loss required for the progression of gastric carcinoma, the intratumoral distribution of loss of heterozygosity (LOH) was compared in early and advanced tumors: early loss is uniformly observed in all tumor areas and late loss is localized in parts of tumor tissue. Tumor sites (167 sites) obtained from 42 gastric carcinoma tissues (26 advanced cancers and 16 early cancers) were examined for LOH on chromosomes 5q, 9p, 13q, 17p, and 18q. By using two or three microsatellite markers for each chromosome arm, it was shown that of 29 tumors showing LOH in at least one tumor site, 15 (51.7%, 12 advanced and three early cancers) harbored multiple losses on three or more chromosome arms, and 89.4% (84 of 94) of these losses was uniformly found in all tumor sites tested. In the remaining 14 tumors (48.3%, eight advanced and six early tumors) with sporadic losses on one or two chromosome arms, 44% (11 of 25) of the losses were commonly shared among the sites tested. Such marked difference (P<0.001, Fisher's exact test) in the intratumoral distribution of multiple and sporadic LOH patterns proposes two distinct LOH subtypes: multiple losses (high LOH), occurring at an early stage with a few additional losses, and sporadic losses (low LOH), taking place relatively late during tumor progression. The multifocal LOH findings imply that, rather than being gradual, the allelic losses take place in two manners that are already determined at an early stage.