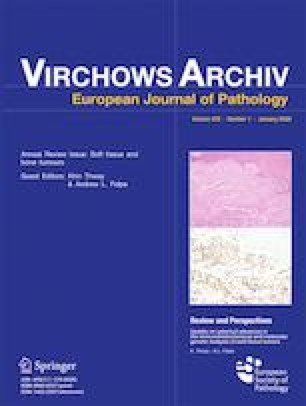 The evolving spectrum of endocervical adenocarcinoma in situ (AIS)

With regard to precursor lesions of ECA, the current WHO Classification includes a single category of adenocarcinoma in situ (AIS) with no division into HPV-associated and HPV-independent types [1]. The precursor lesions of HPV-associated ECA are well known and comprise usual-type (endocervical-type) AIS and the much more uncommon stratified mucin-producing intraepithelial lesion (SMILE) which is considered in WHO 2014 to be a variant of AIS but which has also been suggested by one of us (WGM) to be best regarded as a form of high-grade reserve cell dysplasia [3]; both are associated with high-risk HPV, most commonly types 16, 18, and 45. Intestinal differentiation in the form of goblet cells can occur. Immunohistochemically, p16 exhibits block-type positivity (diffuse strong nuclear and cytoplasmic staining of virtually every cell). These lesions develop at the transformation zone in patients with an approximate mean age of 40 years.

Our understanding and appreciation of the existence of HPV-independent precursor lesions of ECA has evolved only recently and this will also be reflected in the upcoming WHO Classification where AIS will be divided into HPV-associated and HPV-independent types. A welcome addition to the limited literature on HPV-independent AIS is a study by Asaka et al. which appears in this issue of Virchows [4]. We briefly review the current knowledge regarding HPV-independent AIS followed by a discussion of the strengths and weaknesses of the aforementioned paper and finally, we discuss our approach to these lesions and suggest areas where future study is needed.

The study by Asaka et al. included 36 cases of AIS and 25 cases of LEGH and classified cases of AIS based on their immunophenotype using a panel of cell lineage-specific markers comprising claudin 18 (CLDN18) (gastric epithelial marker), cadherin 17 (CDH17) (intestinal epithelial marker), and PAX8 (Müllerian epithelial marker), in association with HPV testing [4]. The cases of AIS were immunophenotypically classified as G-AIS, intestinal-type (I-AIS), gastrointestinal-type (GI-AIS), Müllerian-type (M-AIS), and AIS, not otherwise specified. All 25 LEGHs were categorized as gastric-type. All cases of LEGH and G-AIS were diffusely positive for CLDN18; expression of this marker was observed in 40% of I-AIS. CDH17 expression was observed in all I-AIS. In GI-AIS, both CLDN18 and CDH17 were diffusely positive. PAX8 expression was present in all “Mullerian type” AIS. All G-AIS were HPV-negative while most I-AIS and GI-AIS were HPV-positive [4]. Strengths of this study include the relatively large number of cases of HPV-independent AIS which are rare lesions making their study problematic, the fact that there has been minimal description of such lesions in the literature, and the use of cell lineage-specific markers. However, we disagree with the authors in their terminology. Since essentially all of these precursor lesions are of Mullerian origin, we prefer the term HPV-associated to M-AIS. Moreover, we disagree with including separate categories of G-AIS, I-AIS, and GI-AIS; we feel this is an overcomplication and our approach to this is detailed in the next paragraph.

As discussed, the upcoming 2020 WHO Classification will divide precursor lesions of ECA into HPV-associated and HPV-independent. Much is known about HPV-associated AIS but there is little information regarding HPV-independent precursors. Future studies of larger numbers of these lesions are required to document their full morphological spectrum, immunophenotype, molecular features, risk of neoplastic transformation, and optimal management. Given the rarity of these lesions, this will likely only be achievable through collaborative studies. Future studies should also aim to elucidate the precursor lesions of other HPV-independent adenocarcinomas (mesonephric, clear cell, and endometrioid) which are even more uncommon than gastric-type.

This manuscript meets the ethical standards.