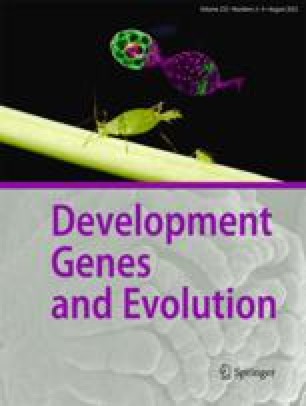 Isolation and characterization of a Bombyx vasa-like gene

A cDNA for a vasa-like gene (BmVLG) was isolated from Bombyx mori. As with vasa in Drosophila, the expression is restricted to the germline in the larval (and pupal and adult?) stage, and the maternal transcript exists. However, the maternal transcript shows localized (germ anlage) distribution patterns, and after degradation of the transcript during germband formation the transcript within cells clustering in the midst of the germ anlage, which eventually give rise to germ cells, remains and continues to be expressed during subsequent embryogenesis; this contrasts to the case of vasa in Drosophila. These results not only indicate the usefulness of BmVLG as a germ cell marker but also suggest the usefulness of this gene (family) in the study of insect germ anlage formation.